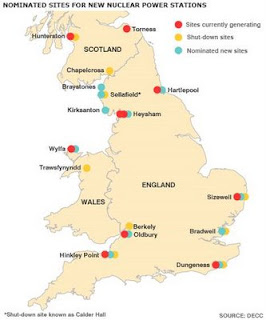 Good news for the Irish Government's electric vehicle ambitions: the British Government has identified eleven sites in the UK for future nuclear power stations that will likely supply some of the electricity Irish EV owners will need. The details have been published by the Nuclear Decommissioning Authority, the map is from a BBC report.

Our nearest nuclear site will be Wylfa, close enough to where the East-West Interconnector will land in North Wales. From the UK's perspective, moving ahead with the renewal of its nuclear power generation capacity could not come soon enough. In fact, they've probably left it too late. With UK oil production plummeting, and today's FT anticipating another bull market for oil as non-OPEC production falls, it is vital that the UK expands its alternative energy sources.

Britain's ability to export electricity to Ireland will be vital to our future energy security. They also have their own EV ambitions too of course, but if the Irish Government's aims of having 10% of the transport fleet fully electric by the year 2020 (equating to approximately 230,000 vehicles in today's fleet numbers), then we will need all the electricity we can get. And wind won't do.