The Re-Enchantment of the World 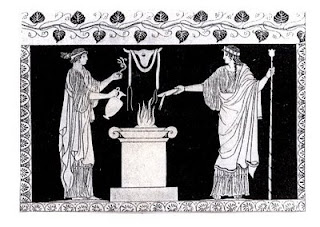 I've just finished reading Frederick Turner's delightful book Shakespeare's Twenty First Century Economics: The Morality of Love and Money. The penultimate chapter is called The Economics of Resurrection. Apt on the day that's in it: Easter has always been my favourite Christian holy day.

Turner is eloquent about the relationship between humanity and nature, and is rightly dismissive of the modernist nihilism that now pollutes too much Western thinking. He believes that the tide of nihilism is ebbing and that we are witnessing the re-enchantment of the world. He's a poet and English professor, yet he has more insight into the workings of the economy than some of the economists I have read. Here's what he has to say about the role of poets in creating the new economy of the 21st century:

Perhaps the greatest artistic challenge for the new generations of artists and poets who are now growing up in the ruins of modernism and postmodernism will be to build upon what the artists of the past have done, listen to the scientists, learn - as did our mythical predecessors Solomon and Orpheus and Taliesin and Vyasa - the language of plants and animals and stones, and create a grand channel of metaphorical and narrative commerce between ourselves and the rest of nature. No enterprise could be more enriching to both the human economy and the divine.

As he reminds us in a recent podcast interview, both the word 'market' and 'mercy' come from the name of the Roman god of messengers and commerce, Mercury. As do 'commerce' and '.com' for that matter. Turner challenges the traditional Marxist critique of the market as impersonal, rather he argues - through his interpretation of Shakespeare - that the market is a place where we create value through our interactions with strangers, interactions that demand a level of trust and reciprocity in order for them to be sustained. And in creating value we perceive ourselves as valued. The tragedy of the current crisis is that it was the result of the financial sector moving away from the trust and reciprocity that are essential to a healthy economy.

If the credit crunch marks the high water mark of crony capitalism, I suspect the New Atheism represent the high water mark of the wider postmodernist venture. As writers like Madeleine Bunting have pointed out, the in-your-face stridency of the New Atheism is, hilariously in my opinion, straight out of the bible-thumper's handbook of communication. I prefer the gentler, more enchanting secularism of writers on Doubt like Jennifer Michael Hecht - another poet as it happens.

Easter for me is about new beginnings: a re-enchantment with being alive in this wonderful world. There is a similar strain of thought in the writings of Turner and others who recognise, as one reviewer puts it, that "philosophical reflection need not end in fashionable nihilism or pragmatic utility. Nor, above all, must it deny the 'desire for eternity' that animates and elevates the human soul".

The challenge for this century is to find that path to re-enchantment that builds on our extraordinary achievements so far, and that avoids the pitfalls we are all too familiar with. Creating an economy that, ultimately, makes us all rich. In a way we are already re-enchanting the world - as Kevin Kelly points out, even our technology now has the capacity to create 'minds' and embed them in the world around us: minds already superior to our own at specific tasks (like search engines). I think the poets will lead us along that path, aided and abetted by the enchanting insights of science that help us re-perceive ourselves and the world that we live in.
Posted by Gerard O'Neill at Sunday, April 12, 2009