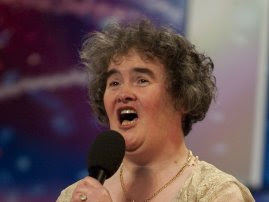 I have to admit to being one of the last (okay, nearly the 34 millionth) person to hear about Susan Boyle. It is a delightful story: the duckling who turned into a swan before the cynical eyes of the Britain's Got Talent judges (including Simon Cowell). Go on, if you're even further behind the populist curve than I am then join the other 33.7 million viewers and watch it on YouTube.

I like the analysis of the story over at the Psychology Today blog. Their conclusion:

That's right - it seems second impressions are more lasting than first impressions. And yes, even as superficial a species as men do actually change their opinions about some attractive women even after very (very) positive first impressions. Which is kind of reassuring after all the neuroscience that was telling us you've got 0.5 seconds to make an impression or its too late.

But the Susan Boyle story points to a wider issue. That's the issue of how we judge talent. I read a delightful research paper recently called Superstars and Mediocrities: Market Failure in The Discovery of Talent. The author Marko Terviö explores why so-called 'talent' gets so highly rewarded in many sectors of the economy, when objectively it would be quite cheap to replace the incumbents with equally adequate workers for a fraction of the cost (bank executives anyone?) Terviö concludes that:

... any profession where the ability of inexperienced workers is subject to much uncertainty, and where performance on the job is to a large extent publicly observable, is a likely candidate for market failure in the discovery of talent. This market failure would manifest itself as a bias for hiring mediocre incumbents at excessive wages. Markets for lawyers, fund managers, advertising copywriters, and college professors are among other possible cases not explored in this paper. It can be argued that differences in talent that are only discovered on the job are in fact the main source of talent rents in the economy. If that is the case, then much of observed superstar incomes could be, instead of a rent to truly scarce factors, a symptom of inefficiencies in the discovery process of talent, largely resulting from limitations to legally enforceable contracts.

His solution appears to be fixed term contracts all round - that way new talent will have a better chance of making itself known in time to replace under-performing incumbents. Mind you, they have that in politics don't they (elections and all that), but you wouldn't exactly say it has, eh, ensured that the cream has risen to the top?

Maybe instead we need a political version of Ireland's Got Talent? Susan Boyle for Taoiseach anyone?
Posted by Gerard O'Neill at Monday, April 20, 2009