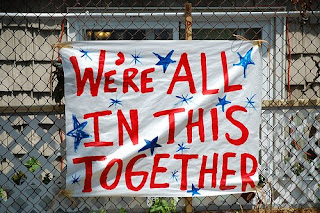 Once we purge ourselves of blaming others, we free ourselves to take command of our own lives again.
Alan Weiss

Liam Delaney has started an interesting discussion over at the Geary Behavioural Economics Blog on the theme of 'what is good about recessions? I think it is an interesting issue because I'm surprised at how many times recently in focus groups and surveys I have found evidence that a lot of Irish people think the recession isn't all bad. In some respects it might even be a good thing. Not just in terms of falling prices and mortgage repayments, but also in terms of people feeling under less pressure to 'keep up with the Jones'. And, more positively, there's an emerging sense that "we're all in this together" and we'll only fix it by re-connecting with the traditional strengths of the Irish people: openness, friendliness, trust, compassion.

Sure, there's a certain amount of 'survivor guilt' about still being in employment if your friends and colleagues have lost their jobs - though maybe not as much as there used to be. Moreover, I don't sense the same compulsion to point the finger of blame at certain individuals or groups that was there back in November and December. It's as if people have gotten over the fact that we're in a recession, and rather than get busy blaming they've gotten busy dealing with it instead.

The Irish people are not alone in seeing a possible silver lining around the cloud of recession. The Great Depression in Britain is recalled by many who lived through it as a time of solidarity and, well, fun. Coming back to the present, The Economist notes a seismic change in consumer psychology in relation to shopping. Conspicuous consumption is out: now you prove your 'sophistication' by what you don't buy, instead of what you do buy.

The nearest analogy to some of the sentiment I see in Ireland today is that of people during wartime. Ireland didn't participate in World War 2, so we never needed to develop the Blitz Spirit. Perhaps now is the time?
Posted by Gerard O'Neill at Monday, April 06, 2009