The British Chancellor appears to have adopted the Brian Lenihan approach to Budgets in touch times:

- hit the middle class with tax increases
- make modest reductions in public spending
- load up on borrowings for our grandchildren to repay.

Not waving but drowning. The results look set to be much the same for both countries: the nastiest recession since the Great Depression - with a bank bailout thrown in for good measure. Below is the now infamous IMF table showing Ireland and the UK with the highest exposure to the banking crisis in terms of the final bill: nearly 14% of GDP in our case (ht Burning our Money). 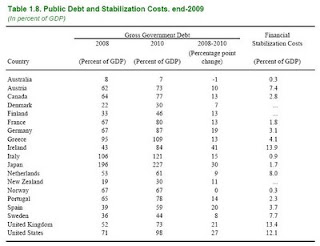 However, it doesn't look like we'll be keeping company with the UK for much longer. The IMF's latest World Economic Outlook contains quite shocking forecasts for Ireland, as shown in the table below (I've underlined the Irish stats - click on table to enlarge): 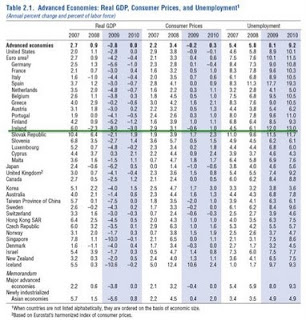 According to the IMF, Ireland will experience the most severe recession this year of all the countries they survey, except for Singapore and Iceland. Then it gets worse: Ireland is expected to experience the most severe recession of all the countries in the IMF forecasts - period. Even Iceland is expected to do better next year than Ireland.

Our forecast contraction in GDP of -3% in 2010 is the price we are paying for our government's curious ambition to put the economy in hock in order to bailout the banks. I hope they're worth it.
Posted by Gerard O'Neill at Thursday, April 23, 2009