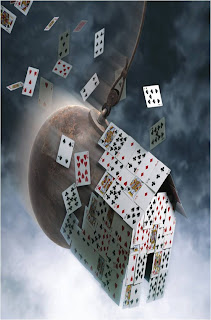 So now we know: your home is not an investment. No more than your car or your fridge. Your house provides a useful stream of benefits (shelter, a roof over your head, that sort-of-thing), but it is not a reliable route to becoming wealthy (okay, I'm not sure what else is right now, but that's for another post).

The problem is that too many people (buy-to-renters, developers, bankers, finance ministers) thought otherwise. We are now paying the price for their misperception. As the recent NIB report on the (former) wealth of the nation points out in figure 9 on page 15, some 52% of the the wealth of Irish households is still tied up in owner-occupied housing. Another 16% is tied up in farmland. We are still fixated on roofs and rods.

As reported by the Central Bank yesterday, most of the increase in Irish household debt in recent years was attributable to mortgages on properties. And the problem, as I've noted before, is that debt is a fact, wealth is an opinion. What we owe and what we're worth are two very different concepts unfortunately. The decision by the Department of Finance to remove mortgage interest relief from tens of thousands of households will make that stark reality even clearer for many.

We're going to get a lot poorer before we figure out how to get wealthy again. And it won't be through borrowing to buy unproductive 'assets' like houses. Which won't be a bad thing either, come to think of it.