The Welfare of the State 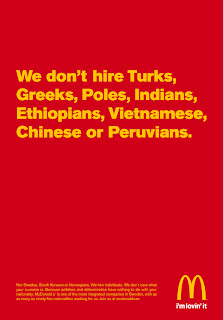 The thing that struck me recently watching the YouTube video of the queue for jobs at Londis was the number of foreign nationals in the queue - judging solely by appearances of course. Though immigrant numbers have declined from their peak, clearly many now find themselves faced with a situation whereby life 'back home' is even more difficult than life in recessionary Ireland. So they are choosing to stay.

This is probably better for their home countries as well. As Harvard economist Lant Pritchett points out in this compelling presentation, the benefits to the world's poor from emigration vastly exceed the benefits from foreign aid and even from free trade. So if Irish Aid really wants to help the world' poor it should campaign for an open borders policy ...

But it won't happen, obviously. Firstly, the most successful idea of the past two hundred years is not socialism or capitalism but nationalism. We think of ourselves and of others in terms of nationality. Moreover, many of the social innovations of the past hundred years have been national in their nature and implementation. Like the Welfare State. It was Milton Friedman who once observed that "It's just obvious that you can't have free immigration and a welfare state." The very same debate will be conducted in Ireland and throughout the rest of the EU in the coming few years, exacerbated by the recession.

Christopher Caldwell has elaborated on Friedman's observation recently in the Sunday Times:

Immigration also weakens welfare states by making native taxpayers less willing to fund them. Five years ago David Goodhart of Prospect magazine warned that social programmes arise out of a sense of obligation to fellow citizens, which gets harder to maintain when fellow citizens have a different culture.

This seems to be true empirically: Alberto Alesina and Edward Glaeser, the Harvard economists, have shown that roughly half of Americans’ antipathy towards European-style socialism can be accounted for by the ethnic diversity of the United States. This view is given support by the recent work of Robert Putnam, the sociologist, who finds that people living under conditions of diversity “hunker down”. They trust their neighbours less – even neighbours of their own kind. They are less philanthropic, less social and less inclined to pay taxes.

Such tensions may, of course, be short lived if the economy here and elsewhere recovers. No more Londis queues. I don't think the Irish have any real antipathy towards immigrant workers: but quite a few (actually, a growing number of those I speak to in focus groups) are antipathetic towards so-called welfare tourists. No doubt there are some foreign nationals abusing the Irish social welfare system (and even a few Irish citizens doing the same in other countries) but I have no real sense of the scale of the problem. Nor do I think it is especially material in terms of overall social welfare spending.

When it will become material will be when the Government is forced in the next Budget (and probably a few more after that) to radically restrict the level of and entitlement to social welfare payments as it struggles to balance its finances. Then we will face what Charles Murray considers to be a uniquely European dilemma, namely the risk that the Welfare State will undermine the Welfare of the State. He has a classically liberal aversion to welfare as follows:

The problem is this: Every time the government takes some of the trouble out of performing the functions of family, community, vocation, and faith, it also strips those institutions of some of their vitality--it drains some of the life from them. It's inevitable. Families are not vital because the day-to-day tasks of raising children and being a good spouse are so much fun, but because the family has responsibility for doing important things that won't get done unless the family does them. Communities are not vital because it's so much fun to respond to our neighbors' needs, but because the community has the responsibility for doing important things that won't get done unless the community does them. Once that imperative has been met--family and community really do have the action--then an elaborate web of social norms, expectations, rewards, and punishments evolves over time that supports families and communities in performing their functions. When the government says it will take some of the trouble out of doing the things that families and communities evolved to do, it inevitably takes some of the action away from families and communities, and the web frays, and eventually disintegrates.

Personally I prefer to weight the balance more towards immigration than towards the welfare state. Though I don't favour completely abandoning the latter, at least until a robust network of voluntary, community based support networks for workers and dependants are in place. As existed in many towns and cities in the 19th and early 20th century.

But hopefully economic recovery will come soon enough for us to avoid either ethnic tensions or real hardship due to welfare cuts for those with no other options.

Postscript: I just came across this interesting analysis over at VoxEU about the historical relationship between the economic cycle in host countries and attitudes to immigrants. No major surprises - though they point out that the unemployment rate in the host country is a much stronger influence on decisions to 'stay or go' than unemployment in an immigrant's home country.