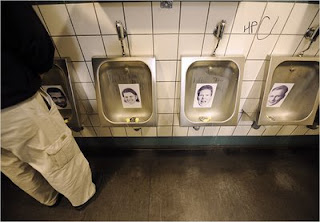 This is what they do to bankers in Iceland - or at least to the ones who fled the country after the collapse. Now this doesn't mean I'm suggesting any Irish pub should do the same, tut tut. Perish the thought.

Still, it is an interesting example of behavioural economics at work: instead of doing something so unhealthy as drowning your sorrows why not, er, vent your feelings on those who caused them in the first place? You're happy, society's better off (less costly than rioting) and it provides the right incentives for bankers to behave themselves in future.

It's not quite where folks thought behavioural economics would end up after 250 years - but then it's the unpredictability that makes it such an interesting subject after all.
Posted by Gerard O'Neill at Tuesday, May 05, 2009