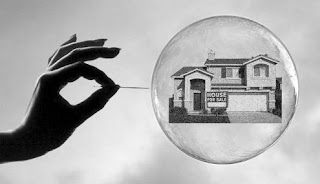 What will Ireland be like in a few years time? As it happens, I've been asking some senior executives from a number of Irish businesses this question lately. If I was to use one word to summarise their varied (and very interesting) answers it would be: smaller.

In three or four years time, if we are lucky, we will have an economy which needs to look very different from 2007, the final year of the first credit-fuelled bubble in the State’s history. It should look like this: (i) Government debt ratios stabilised and sovereign credit spreads back to low levels; (ii) competing banks strong enough to lend (a little); (iii) a competitive economy producing more exports, less houses, and (iv) a smaller and less leveraged balance sheet. This economy will inevitably be smaller than 07 for a while, have lower employment, a smaller construction sector, smaller aggregate bank balance sheet, bigger Exchequer debt, lower public spending, higher tax rates and possibly BOP surplusses for a few years.

He's channelling some of the same ideas I'm gathering from Irish business leaders. Interestingly, nowhere in Colm's prognosis is the prospect of Ireland leaving the euro and benefiting from devaluation. Just as the Finnish eventually did to rescue their own depressed economy in the early 1990s. David McWilliams certainly thinks leaving the euro is our only real option. He's right of course about the benefits of devaluation: our traded goods and services (and the workers who make them) suddenly become much cheaper relative to those from competing suppliers on the world's markets - even if import prices push up inflation - and so unemployment should fall back as a result.

So what's stopping us? We have left a currency zone before after all - that of Sterling - so we know how to do it. Nevertheless it would be fair to say that there is next to zero political appetite for such a move - neither among the political parties nor among the social partners. So it isn't going to happen any time soon (if ever).

The alternative plan (though nobody's articulating it as such) seems to be to use deflation to deliver the same benefits as devaluation - without the imported inflation as it happens. It is certainly an original and very brave plan. And it might even work. We are seeing wage freezes and salary cuts across the private sector. As the recession deepens (and don't let recent stock market rallies fool you into thinking it's over) we will see even further cuts in real and nominal labour costs for Irish businesses.

Ironically, the recent increase in income taxes through levies and the resultant higher marginal rates approaching over 50% for some households will make the net 'loss' of income from wage and salary cuts that much less painful. When the government's deflating your net income, so what if your gross income takes a hit? The government was taking most of it anyway. Expect to see a great many people working through such calculations as pay slips and pay packets arrive at the end of this month ...

The outlier in all of this, of course, is the public sector. Public sector employees don't do deflation: in fact, their entire remuneration structure assumes inflation. Such is the legacy of 'benchmarking', alongside older habits like annual increments for time served. Or long service increments for TDs. Money for continuous breathing - can we all have some please?

Paul Krugman is worried about wage deflation in the United States and the threat of a Paradox of De-leveraging. He may be right about the macro level costs: but the micro level benefits will outweigh the former as firms and exporters become competitive again. Precisely the same thing happens following a currency devaluation. Moreover, it is ultimately only the private sector that delivers increased productivity - and increased productivity that ultimately lifts wages and our standard of living. Lower input costs, ceteris paribus, will certainly increase productivity.

So perhaps it is time to see deflation as our next best option to leaving the euro - and a less risky one at that. Smaller may not be beautiful, but it will certainly be a lot more sustainable. At least, that's the plan.
Posted by Gerard O'Neill at Thursday, May 07, 2009