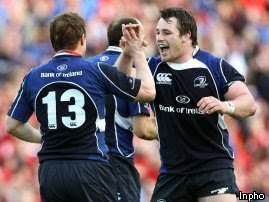 Dublin beat Munster today in the semi final of the Heineken Cup. Okay, technically it was Leinster - but you know what I mean. It was one of those matches where most of Ireland hoped the Dubs would get beaten (as usual). Except this time I - Ulster born and bred - was on the side of the Dubs (as were my two Dublin born children). And it was glorious: somehow I don't think we're going to hear any more jibes about 'nancy boys' from our fellow countrymen in the south west any more after today's performance.

Sport, like war, is politics by other means. I don't know if the antipathy of the greater part of Ireland towards the capital is worse than in other countries. But it's certainly as unwise. Bear in mind that Dublin subsidises the rest of the country through its taxes, and yet is underpresented in the Dáil in terms of the number of TDs it elects.

That will change eventually I'm sure. But first things first: there is the small matter of winning the Heineken Cup to get out of the way first ...
Posted by Gerard O'Neill at Saturday, May 02, 2009