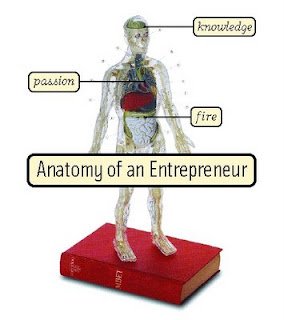 I've often wondered if we fetishize entrepreneurship? I enjoy business success stories as much as the next capitalist, but too often it seems the only 'true' successes - in the eyes of some commentators - are those involving start ups. That doesn't seem right to me. Not least because the overwhelming share of jobs, output and wealth are generated by established (sometimes long-established) businesses, whose start-up days are a distant memory.

Yesterday saw the publication of the Global Entrepreneurship Monitor 2008 by Forfas. It doesn't contain any great surprises: some one ten adults are thinking about setting up their own business (same as most years); but for every adult who has set up in the past 3.5 years there are two that have been going for longer than this. There are no details about the methodology or sample used to do the study - but it contains comparisons with previous years which implies the 2008 study used the same national survey method as before.

The report also feels obliged to comment on the lower incidence of entrepreneurship among women: as if there is some kind of 'proper' level of entrepreneurship denied to women. Utter nonsense of course: there are excellent women entrepreneurs and an even greater number of women with no interest whatsoever in the sacrifices entailed by starting up a business. Especially when you have young children to rear.

As I've noted before, luck is a far more important influence on entrepreneurial success than any of the usual bromides about skills, technology, training etc that reports like GEM tend to focus on. This may be one reason why - by some measures - start ups are net destructive of jobs and resources. Most would-be entrepreneurs would be better off pursuing a career as a wage slave: it might not be terribly fulfilling, but it leaves you and your family a lot better off financially speaking.

Of course, we are now in a deep recession and these may not be the most auspicious times to set up a new business anyway. So I suspect that a GEM 2009 study would show a sharp decline entrepreneurial aspirations in Ireland. Though we'll never know as the authors inform us in the Acknowledgements that "Due to budgetary constraints on the part of our sponsors, Ireland will not participate in the GEM research cycle in 2009". Maybe there are more important things to focus on after all?
Posted by Gerard O'Neill at Tuesday, May 19, 2009