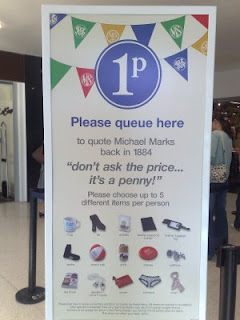 You know deflation has a firm grip on the economy when prices are back to levels last seen in the Eighties: that's the 1880s. Marks & Spencer have a special promotion on in their branch nearby in Blackrock (where I snapped this picture): buy up to five items for '1p' each: prices last seen in 1884. There was a queue forming as I took the photo: unfortunately I had to be somewhere else or I might have joined it!

My advice to M&S (and its customers) is: make the most of it while you can - the Government will probably impose a 7000% vat increase to ensure it still gets its pound of flesh (£ not LB). The behaviour of the Government in the last budget is a classic illustration of the economic concept of rent seeking. When the market drives down fuel prices and interest rates, the Government pockets the savings for itself rather than letting the consumers enjoy the benefits. For example, with the removal of mortgage interest relief for non-first time buyers, and the smash'n'grab hike in the fuel duty on diesel. In the free market, prices go up and down. When the government gets involved they just go up and up.

So when profit seeking capitalists like Marks & Spencer offer you a good deal, make the most of it before the Government comes around demanding their slice.