Negative Equity: So What? 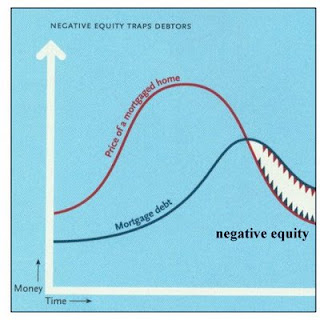 That's the incidence - but what about the scale of negative equity? Bank of Ireland's preliminary results contain some sobering statistics about negative equity (reported in the 'accompanying presentation': slide 18). The bank estimates that 12,200 of its mortgage holders are in negative equity. The precise basis for the calculation isn't clear (though obviously it involves what was originally paid for the properties involved - adjusted for the trend in house prices since then - less the amounts outstanding). The Bank's analysis reckons that the 'negative' value of the negative equity (i.e.: what these 12,200 mortgage holders would be left owing if they all sold tomorrow for the estimated current price) is a total of €355 million. That's a lot of money but ... it works out at €29,000 per mortgage holder. Not quite the end of the world or the road to financial ruin for life: more like the cost of a family car loan that could be repaid over 5 years.

I knew many people caught in the negative equity trap in London where I lived in the late 1980s when house prices collapsed and did not recover until the mid 1990s and later. How did they manage? They either stayed where they were until prices came back to a level that could clear their mortgage (up to ten years later in some instances); or sold and paid off the remaining negative balance with a personal loan. Or handed back the keys and walk ...

So in thinking about the consequences of negative equity we need to keep several things in mind:
So what could be the wider implications for the economy of negative equity? Obviously in the first instance it will slow down certain parts of the housing market - especially the sales of properties that would be the 'natural' next purchase by, say, first time buyers now 'stuck' in smaller properties than they would like (for example when they start to have children). But not all mortgage holders in negative equity are living in one bedroom apartments. Many are in perfectly adequate family homes that should suit their accommodation needs (if not their lifestyle ambitions) for the foreseeable future. Long enough, indeed, to see house prices come back to a level that offsets their diminishing mortgages (as they continue paying them down).

So the negative impact of negative equity will, at worst, be confined to those unfortunate few who have no choice but to sell their properties for less than they owe and, probably, take out personal loans to pay off the shortfall. Such loan repayments will add nothing to the economy as such (unlike, say, loans taken out to buy a car or furniture): but nevertheless we are talking about a marginal impact on aggregate consumer demand.

One thing we can be grateful for in relation to the behaviour of our banks during the boom (make that the only thing) is that we never got to treat our homes like ATM machines, the way US and even UK home owners did. There, negative equity is a far more serious issue in terms of both its incidence and its wider economic impact. Especially as US consumers seek to deleverage their domestic balance sheets at a record rate.

For those Irish mortgage holders experiencing negative equity, the best solution may simply be to wait - especially if their homes meet all their genuine accomodation requirements for now. And in the meantime, just don't lose your job, become ill or get divorced ... which probably goes for all mortgage holders come to think of it.
Posted by Gerard O'Neill at Wednesday, May 20, 2009