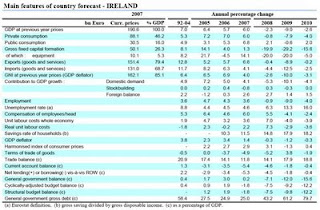 Where will growth come from? The latest European Commission forecast for Ireland, published today, paints much the same dismal picture as the ESRI did last week. As the table shows, Ireland's economy is set to contract this year and next, with unemployment soaring to rates last seen in the early 1990s. All four textbook sources of demand in the economy - consumer spending, investment, government spending, exports - are shrinking. Full spectrum impotence.

The lessons from other countries who have been here before us are not very encouraging. As Jaakko Kiander pointed out in his recent ESRI presentation on Finland's Great Depression 1990-93 (pdf), there tends to be a lot of pain before there is any gain from measures to restore growth. And the main measure that solved Finland's problems was a 40% depreciation in the Finnish maarka. We don't have that option obviously. Moreover, even with depreciation it took several years before Finland crawled out of the depression it found itself in. He implies that without depreciation, and relying solely on deflation to achieve the same boost to competitiveness, it could take a decade or longer for Ireland to follow the same course. Not a pretty prospect.

So back to the growth challenge. As I've noted before, recoveries are ultimately microeconomic phenomena. Even after a currency depreciation it is the decisions of hundreds of businesses, thousands of workers and millions of customers that work the real magic of recovery. But there are things that others can do to help microeconomics work its magic. Reducing the non-wage costs of retaining employees is an obvious place to start. Even ICTU has grasped this, with some sensible recommendations about making it easier for employers to flex up and down their labour inputs without being forced to make staff redundant: along with the potential for skills enhancement during down times. Mind you, I hate to think what the compliance and form filling requirements would be if every aspect of their €1 billion package were implemented.

Still, a focus on job preservation is a necessary but not sufficient response to the present crisis. There is the equally important challenge of job creation. Especially for graduates. Geary Institute's Liam Delaney has started a timely discussion about what can be done to avoid thousands of Irish graduates and post-graduates ending up on social welfare. UL's Stephen Kinsella is running a student poll to guage how big the challenge is for soon-to-be graduates.

Universities and third level institutions generally can play a part themselves of course. The UK's NESTA organisation has published a report recently on The Connected University. It demonstrates, with several detailed case studies, how universities have played a pivotal, catalytic role in energising the local economies in which they are located and creating a rich, sustainable flow of wealth and job creation opportunities. And bringing it right back to the job creation challenge, if Ireland's third level institutions start using their alumni networks less to raise funds and more to source internships and employment for their graduates (not just work experience placements for undergraduates) then they can play a key role too.

Without the textbook options of devaluation, borrowing or tax cut-funded stimulation, or good old fashioned inflation we must look to other sources to fuel the recovery. And as ever they will be found in the ambitions, decisions and actions of Irish businesses, Irish workers and Irish consumers. Such are the extraordinary circumstances that we now find ourselves in, there is no textbook to guide us as to what Ireland has to do in the years and decades ahead. As ever in such circumstances we must then be prepared to experiment, to learn from failed experiments, and to rapidly scale those that work. Kind of the way markets work come to think of it.
Posted by Gerard O'Neill at Monday, May 04, 2009