What Is the Point of Anglo Irish Bank? 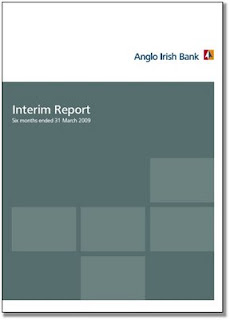 This from today's interim results from Anglo Irish Bank:

New lending in the period was solely to the Bank's existing customer base, primarily in Ireland and confined to amounts which were previously committed or approved to protect asset quality and reduce risk.

In other words, no new customers welcome. Would you invest €4 billion in a bank that's shut for business? Too late: if you're an Irish taxpayer you already have.

As Willem Buiter once eloquently put it, banks that won't lend money are utterly useless, like tits on a bull. Nor are Anglo alone: today's Central Bank statistics show total bank lending to households and non-financial businesses to be down by €2 billion in the year to April. If you separate out the value of outstanding loans to non-financial corporations, i.e.: businesses (table B2.1), the combined value is down 1% in March from February, and up an anaemic 1% on March 2008. The bank strike continues it seems.

Which does rather beg the question: why invest €4 billion of taxpayers money in an utterly unproductive asset, when it could be invested in a new bank which could then lend the money to businesses with the potential to grow, repay their borrowings and contribute to job and wealth creation? Or simply give the money back to the taxpayer and let them spend it more wisely and productively?

Enough with the 'transgender' banks I say.
Posted by Gerard O'Neill at Friday, May 29, 2009