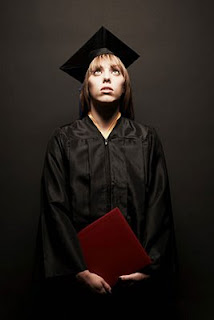 Over the next few weeks and months, tens of thousands of graduates will enter the workforce for the first time. Only the door will be locked. In America they're calling it the worst year to graduate from college ever. Though for once I think the hyperbole applies more to Ireland than to the US.

I've talked to a number of senior business people over the past few weeks and many of them are thinking about this issue themselves. Not least because quite a few have children precisely in the 'about to graduate' category. My own take on it is that almost all those businesses that would have normally taken on 1-2 or even 10-20 graduates are simply putting the decision on hold. This is not good news for graduates nor for our much vaunted ambitions to be a knowledge economy.

So what to do about it? As ever, the price mechanism has a role to play. One idea I have been discussing with others is that of giving every business in the country a 'graduate voucher'. It would work as follows:
The value of this approach is that it allows companies to employ graduates 'on the cheap' without having to find savings elsewhere (i.e.: firing more expensive employees). Ideally the vouchers should be tradable, in other words, if I don't want to hire a graduate I should be able to sell my voucher (presumably for anything up to €12,000) to those eligible employers who want to take on more than one graduate.

There will be a net cost to the Exchequer, even allowing for the savings in no longer having to pay social welfare to unemployed graduates. But the net gain to the economy in terms of engaging graduates in the workforce and not letting their skills atrophy should outweigh such costs.

I'd certainly be prepared as an employer to use the graduate voucher myself: and so would many others I've spoken to.

Clarification: just to clarify, I've assumed a maximum fulltime annual salary for a graduate of €24,000 of which €12,000 would be rebated via the voucher scheme.
Posted by Gerard O'Neill at Thursday, May 14, 2009