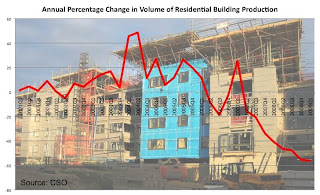 When did the recession start? Curiously, the recession - as far as housing is concerned - seemed to set in around Q2 2006 - almost two years before it showed up in negative GDP data. The chart shows the year-on-year growth trend in residential volume production. There was a brief (albeit spectacular), positive blip in Q1 2007 (the peak of Irish housing and stock market valuations) but thereafter the trend (re)turned negative. And then some: a 56% volume decline in residential production in Q1 2009 on the year previous - according to today's CSO report.

And yet nobody was calling it a recession in 2006 (or 2007), though a few did see it coming thereafter. What does this say about economics and its analytical/forecasting skills? Here's one take on the 'abysmal science', from Thomas Naylor - a professor of economics as it happens at Duke University:

No academic discipline has ever been so thoroughly discredited in such a short period of time as has economics over the past year. Virtually no business, government, or academic economists foresaw what may prove to be the greatest economic meltdown in history. Even though all of the evidence points to a major recession, many economists are still in denial as to the downside risk.

Naylor accuses the profession of having been 'blind-sided' by an ideology that preached unregulated markets and low/no taxes. Government was an innocent (though too easily duped) bystander in this version of history. On the other hand, David Simpson's analysis for the Adam Smith Institute of what went wrong observes that:

Governments and their central banks contributed to the boom by: (1) keeping interest rates too low for too long, allowing asset-price bubbles to build; (2) giving implicit guarantees to the banks and other borrowers; (3) failing in their functions of prudential supervision and financial market regulation; and (4) encouraging borrowing by those least able to afford it.

Not quite the 'regulation-free' picture painted by Naylor. Add in the Principal-Agency Problem in relation to bank shareholders vs. bank trader/employees and you get the perfect storm that is still blowing (albeit less forcefully than at the start of the year). I find Simpson's analysis more convincing, even if it lacks the hand-bagging force of Naylor's reasoning. I also find myself convinced by Simpson's take on the when and how of economic recovery (in the UK, but also by extension in the USA and Ireland):

Most Western economies are now in the middle of a painful but inevitable process of de-leveraging debt. Some of these economies are more resilient than others, but nowhere is it possible for an economist to predict exactly when this recession will end. If the present recession in the UK were to follow the pattern of the recession of the early 1980s, as it has done so far, it would take another year to bottom out, and a further two years before returning to pre-recession levels. But there is no reason why it should follow the earlier pattern.

What one can say with confidence is that it will come to an end, because recessions always do. They do so because the market economy is a continuously self-adjusting process of growth and change. There may be political constraints placed on this process, for good reasons and bad, but the satisfaction of both individual and collective wants in the future, as well as developments in technology, provides unbounded opportunities for investment and therefore for the resumption of growth in the aggregate as well as in the particular.

That doesn't mean a recovery in the Irish housing sector any time soon however. Then again, the recession in housing was well underway before a full blown recession set in. Therefore could it lead the recovery? The economic consensus is that it will lag recovery rather than lead it - which I'm inclined to agree with this time.

But it isn't all 'dismal' news from economics. Anti-Dismal reminds us that economics affects political fortunes as well, for good or bad, citing research by Andrew Leigh which shows that:

voters commit systematic attribution errors when casting their ballots – tending to oust their national leaders when the world economy slumps, and retain them when it booms. In the preferred specification, a 1 percent increase in world GDP growth is associated with an 8 percent increase in the probability that an incumbent leader will be re-elected. To put this into perspective, national leaders are re-elected, on average, 57 percent of the time. An extra 1 percent of world growth raises this probability to 65 percent.

Maybe Cowen, Lenihan et al just need to hang in there until a real recovery is underway ...?
Posted by Gerard O'Neill at Monday, June 22, 2009