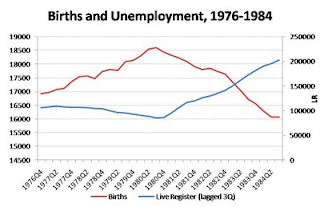 The chart shows what happened to births in Ireland the last time we had a prolonged increase in the unemployment rate. It's a from a timely post by Brendan Walsh over at The Irish Economy blog. Brendan wonders, as do I, whether the current recession will precipitate a collapse in Irish birth numbers, reversing the baby boom previously underway.

I suspect it will, but the cohort effects are probably different from the 1970s/1980s and it might not be as severe. At least I hope not - if we are to avoid the fate of Latvia. And we certainly don't need child-unfriendly changes to tax and social welfare policies that dis-incentivise couples having children. A mistake now being made in Latvia: leading one commentator to accuse the powers-that-be there of national futuricide.
Posted by Gerard O'Neill at Friday, June 19, 2009