A (Bicycle) Accident Waiting to Happen 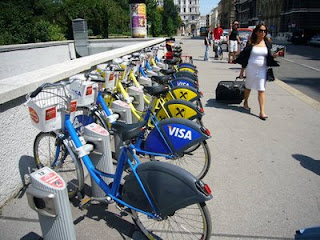 I spotted a row of unusual grey metal columns in Dublin's Exchequer Street yesterday. I eventually figured they were part of the imminent 'bike-rental' scheme to be launched in September by the Council and JC Decaux. Dublin City Council is getting 450 bikes for 'free' from JC Decaux in return for the latter having use of advertising space around the city.

The bikes are the same as those used in a similar scheme in Paris. Which is why we should be worried. Here's Division of Labour on the Parisian experience:

Parisians have clearly taken to Vélib'. They are also taking the bicycles, and wrecking them, at an unanticipated rate.

Since the program started in July, 2007, 8,000 of the bicycles have been stolen, and nearly 1,400 people were arrested for Vélib' theft just last year.

Police have retrieved about 100 of the purloined bicycles from the depths of Paris canals and the Seine River. Some have been spotted on balconies. There have been reports that a few turned up, mysteriously, on the streets of other European cities. But the fate of most of the missing bicycles is unknown.

At the same time, 16,000 bicycles have been vandalized.

It seems half of all the bikes have had to be replaced by JC Decaux. No big deal for Dublin County Council surely - after all the deal is that JC Decaux must have 450 bikes available at all times? So they, and not the Council, are financially liable for replacements. Problem is: the same deal was done in Paris, but it turns out the city council there is now having to pay for replacements themselves - at a cost of €1.6 million a year.

On yer bike I say to that kind of deal. Though preferably not one subsidised by the taxpayer/rate payer.