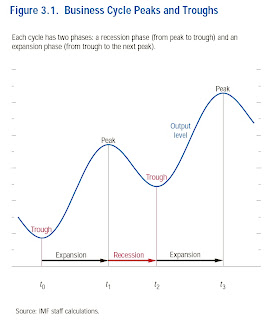 The bottoming out of the ESRI/KBC consumer confidence index suggests we are near the trough of the recession. As I've noted before, consumer confidence tends to move contemporaneously with the trend in the unemployment rate. The chart - from the IMF's recent World Economic Outlook - paints a handy, stylised picture of the business cycle through expansion, recession, recovery and expansion again. Confidence ebbs and flows through the cycle of course.

But confidence is a psychological measure, not an economic one. And psychology is sometimes even more fickle than the economy. Perhaps the 'improvement' in the ESRI's measure is a sign of weariness rather than recovery? That's what Zero Hedge observed recently about a similar upturn in confidence in the United States:

Increases in consumer confidence during the past two months are indicative of desensitization. Consumers are becoming acclimated to weak economic conditions, poor stock market returns, and the continued accumulation of job losses. This desensitization has been emphasized by the mainstream media; particularly in the past few months. The take-home message of articles and news reports has shifted to ‘be happy things aren’t getting worse’ and people are doing just that. Bargain hunters have been lured into many areas including housing, stocks, and even retail products. Meanwhile, important fundamentals like GDP, unemployment, foreclosures, and household net worth go largely unmentioned and underanalyzed.

A curious case of blaming the media for exaggerating the good news rather than the bad for a change! But how useful is consumer confidence as guide to the economic outlook? Some argue it is a contrarian indicator, especially if you are buying shares:

Coming back to the economy, research by my own company suggests that we're just to the left of the trough's low point (as reflected in consumer perceptions about the overall expansion/recession dynamic in the economy). This doesn't mean that the trough will be pointed like a V, rather it will be more of a U, with the pick up not much evident, in my opinion, until this time next year (i.e.: Q2 2010). Though a more widespread recovery should be in place by end 2010, but it won't be strong enough to prevent 2010 recording another year of contraction (just not as bad as this year).