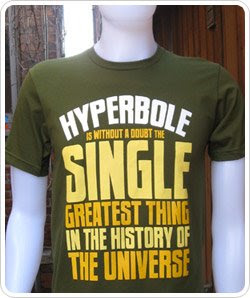 I'm thinking of having a barbecue weekend after next. I went to the Met Eireann website for the weather forecast for eight days hence. There isn't one.

So you can imagine my surprise when I read in yesterday's Irish Times that Prof John Sweeney from NUI Maynooth is predicting that (in the absence of a climate change plan) "If we do not implement a plan over the next decade or two, we will run out of water". Met Eireann can't tell me what the weather will be like in seven days' time but John is predicting the weather with complete certainty for twenty, forty and even one hundred years time.

Upping the hyperbole stakes even further, Oisín Coghlan of Friends of the Earth is quoted in the same article as saying that the summit on climate change in Copenhagen this December will be the “most important meeting of world leaders since World War II”. All if which is a bit odd because the EPA's recent report on climate change and its impact on Ireland paints a far, far less alarming and more manageable picture.

But I guess that doesn't make for interesting headlines, does it? Still, here's one forecast I am certain of: expect a disturbing rise in the level of alarming claims about climate change over the next six months - far in excess of any rise in sea levels over the next sixty years.

And for a more sober and sensible read on the climate challenges we face (and the far more pressing energy challenges) check out this fascinating interview with Prof Ian Plimer. He brings an earthy, Australian perspective to the climate debate.
Posted by Gerard O'Neill at Friday, June 12, 2009