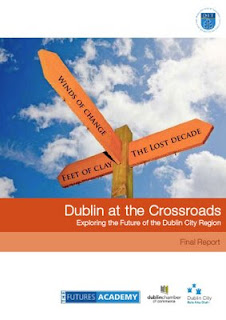 I was at the launch this morning of a new report on the future of Dublin. The report is by The Futures Academy at DIT called Dublin at the Crossroads. As with previous reports by the Academy, it doesn’t pull any punches in terms of the difficulties facing our capital city. Its powerful use of scenarios brings the reader face-to-face with a range of possible futures for the capital. Indeed, it paints a picture of a Dublin metropolitan area coping with the legacy of benign and not so benign neglect that has characterised successive national governments – including the previous one led by a Dubliner.

But while Fianna Fáil-led governments have failed to notice the consequences of their neglect of Dublin, the people of Dublin have noticed. And they’re not happy about it: as witness the recent elections which saw Fianna Fáil lose its MEP in Dublin and its support contract to make it just the third largest party in the capital.

As I've noted before, the extraordinary pattern of Irish regional development ('Anywhere But Dublin') seems driven by a parochial, atavistic culchie versus townie antipathy. But the townies have had enough. As Conor Skehan, a fellow of The Futures Academy, has noted, the demographic destiny of the country is for the greater Dublin metropolitan area to form a growing share of the country's population. And when the capital gets allocated the number of TDs it deserves then the political boot will be on the other foot.

Now that'll be an interesting scenario to contemplate.
Posted by Gerard O'Neill at Wednesday, June 10, 2009