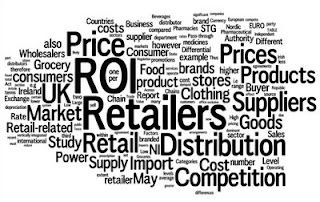 Consumers are becoming more price conscious and thereby forcing retailers to cut their prices - shock, horror! That's just about the conclusion of today's Retail-Related Import and Distribution Study from the Competition Authority. It examines the grocery, clothing and pharmaceutical sectors in Ireland for evidence of 'anti-consumer' practices and abuses. Though as the word cloud I've created from the text of the report shows, consumers don't actually get much of a mention in the report ...

The report has rather more to say about the role of government in preventing consumers from getting a better deal. Take pharmaceutical products - the study notes that:

The impact of the sterling depreciation has been negligible in terms of reducing sales or lowering prices of medicines in Republic of Ireland. Demand for medicines is always relatively stable, even the recession has had only a small impact. The sterling depreciation has given a boost to licensed importers but they are such a tiny part of the supply chain that there is little or no benefit to consumers.

Which might explain why prices in most categories are falling except in those dominated by state pricing decisions (pdf) - namely education and health (and, indirectly, alcohol and tobacco).

Nevertheless, there is a sense from reading the Competition Authority report that it's analyses are already rather dated. Much of the sterling/euro exchange rate anxiety that vexed so many late last year has partially abated. Moreover, recent efforts by retailers to avail of more efficient international buying processes (Tesco and now Dunnes) have ensured further gains for Ireland's cash strapped consumers.

Let's hope their next study takes a more detailed look at the impact of Government policies themselves on consumer welfare (and harm). I suspect there's much, much more room for improvement in that regard. And maybe the forthcoming report from An Bord Snip Nua might go some way to delivering said improvements.
Posted by Gerard O'Neill at Tuesday, June 30, 2009