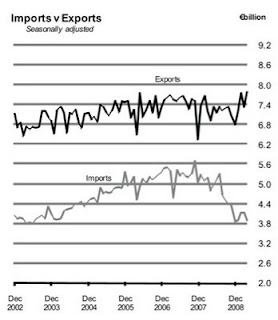 By coincidence the latest trade data from the CSO points to a recovery in Irish export performance on the same day that the National Competitiveness Council tells us we've become too expensive as a location for exporters. It's probably more of an aberration than a contradiction: the NCC case is compelling (and familiar to anyone following the debate).

The collapse in imports rather than the mild recovery in exports is the truer indicator of domestic economic realities. Both the OECD and the IMF produced separate forecasts yesterday showing a collapse in Irish consumer demand this year, and a gentler reduction next year. It will likely take until 2014 for consumer spending to get back to where it was in 2007. Seven lean years indeed.

More importantly in the short term is the issue of bank lending to businesses. The NCC addresses the issue thus:

There are serious concerns that the turmoil in global financial markets and the exposure of Irish banks to bad loans in the declining property sector is affecting Irish firms, particularly small firms, in terms of their ease of access to finance and its cost. It is critical that the success of viable businesses is not hindered by the tightening of credit standards or the high cost of capital. The ongoing efforts to resolve the banking crisis should:

But with the banks forecast by the IMF to lose up to €35 billion on property loans then their appetite for lending might just be a tad restrained. Both the NCC and ISME have drawn attention to this problem - with limited effect so far.

That's a pity because lending to businesses (as opposed to property and land speculators) is crucial to long term economic growth. Chris Dillow references new research which shows that:

a 10 percentage point rise in the ratio of bank lending to firms to GDP is associated with an increase in GDP growth of 0.2 percentage points a year. This controls for other influences upon growth, including stock market activity.

... The researchers also found that bank lending to households has no influence upon long-term growth. ... This has an important implication. It means that if policy-makers want banks to help the economy, they must do more than just ensure the banks are adequately capitalized and tolerant of risk. They must also get banks lending to firms.

It would be a pity if we went and got our costs down to make us more competitive, and incurred all the pain of adjusting taxes and public expenditure, only to discover that the banks are open for business but there's nobody behind the counter? That'll only lead to exporting people. And we know that that didn't work.