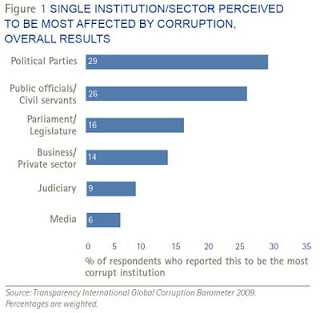 When buying and selling are controlled by legislation, the first things to be bought and sold are legislators.
P J O'Rourke

The problem most people have with representative democracy is the representatives. Tomorrow's your chance to change that of course (okay, not where it matters, but you know what I mean).

Despite the many (many) inadequacies of our public representatives, the one thing we seem to have been spared is widespread corruption. The revelations of various tribunals aside. Yet one of the amazing things about the problem of corruption around the world is how highly correlated it is with ... public representatives, public employees and the power of the state. For all the nasty, horrible, selfish things businesses and their capitalist apologists get up to, it is always politicians, cops and judges who figure in the world league of dodgy people to deal with.

Just look at the 2009 Global Corruption Barometer published today by Transparency International. I've copied the table showing the institutions/sectors perceived to be most corrupt by people in their global survey (which excludes Ireland unfortunately). Businesses hardly get a look in, and when it comes to the actual experience of corruption, businesses don't even figure except in the case of utilities (which are mostly state owned anyway in the most corrupt countries).

The Irish operation of Transparency Ireland run by John Devitt did publish a country report on Ireland earlier this year. The report details the numerous government run organisations designed to police businesses and make sure they don't misbehave. Ironically, it cites the Social Partnership process as one that could be 'potentially' subject to corruption, given "the way in which a significant element of national economic policy is effectively decided upon outside the Oireachtas." (page 140). So if we really want to minimise the potential for amoral businesses to corrupt innocent politicians and policy makers then Social Partnership should be ended. Sure if that's the argument that swings it, then it'll get my vote/brown envelope too.

Sadly corruption will always be with us so long as we have politicians and public servants with lifestyle ambitions above their station. I don't see Transparency International going out of business any time soon - nor would I want to so long as the problem of corruption remains.

But as the TI Global Barometer makes clear: the surest way to reduce corruption is to increase standards of living: affluent people don't need to buy the favours of public servants to get what they want because they can go straight to the market and buy what they need for themselves. That's probably why they call it the free market.
Posted by Gerard O'Neill at Thursday, June 04, 2009