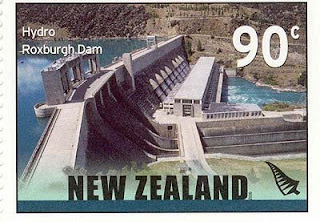 My recent post about Spirit of Ireland drew some flak. Richard Tol has been batting away in the comments with those more enthusiastic about the SoL concept than him (or me).

It is interesting to look elsewhere for examples about combined wind/hydro electricity initiatives. New Zealand is especially interesting, not least because it shares some of the same energy characteristics as Ireland in terms of wind generation capacity (though there are some key differences: New Zealand has active volcanoes and the geothermal power opportunities that go with them!)

The free market energy blog MasterResource has a very pertinent post by New Zealand energy engineer Bryan Leyland. Bryan reflects on New Zealand's own potential for a combination of wind power and pumped storage to substitute out non-renewable electricity generation capacity. His analysis shows that you would need wind and pumped storage generation capacity of 1.55 times the likely level of generation demand to allow for wind capacity operating at a factor of 37% and for losses of 25% of pumped storage capacity due to evaporation and conversion losses. Wikipedia suggests the latter can even be as high as 30%. Hence his conclusion:

The conclusion is that wind power is very expensive and large-scale power supply from windpower (and other new renewable technologies) cannot be contemplated until an efficient, low-cost method of storing large amounts of electricity for long periods is discovered. I am not aware of any technology that comes anywhere near to meeting this requirement.

None of this is to say that the Spirit of Ireland initiative is wrong or fraudulent. Though maybe it's just a tad ambition given the worldwide (though very limited) experience of similar initiatives. Perhaps in going for scale they can solve some of the problems (technical and - most importantly - economic) that beset such ambitions elsewhere.

And of course, unlike New Zealand, we at least can tap our next door neighbour for some spare electricity should we run low ourselves - at least we will when the East-West interconnector is finally (and once again belatedly) in place.
Posted by Gerard O'Neill at Saturday, June 06, 2009