The Silence of the Sheep 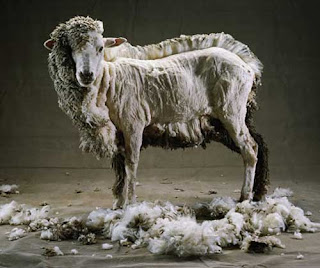 I'm back on the theme of Bye Irish again. IBEC today published a useful paper on the Irish Food & Drinks Industry (pdf) focusing on competitiveness indicators. Or rather, the lack thereof.

The paper laments the concentration of retailers and their dominant position vis-a-vis Irish food manufacturers. It also notes the comparatively high cost of doing business here versus just-about-anywhere-else. All verifiable and useful analyses. However, there is one thing the report is curiously silent about, and that is the Common Agricultural Policy. Which is a bit like discussing Ireland's monetary policy without mentioning the European Central Bank.

Luckily the CSO has helped flesh out IBEC's analyses with its publication of Output, Input and Income in Agriculture 2008. Among the more disturbing aspects of the analyses in the report is the fact that subsidies net of production taxes make up 82% of the entire operating surplus of Ireland's agriculture sector. This has prompted Constantin Gurdgiev to wonder why we still have "a Department of Agriculture in this country if the net and gross value added by this sector is smaller than the net subsidies the sector receive."

The problem for IBEC and the wider food sector that it represents is that we have an indigenous agricultural production system hopelessly distorted by the perverse incentives of the Common Agricultural Programme. Take sheep, for example. The numbers of other livestock in Irish agriculture (cattle, pigs, chickens) have remained broadly stable over the past five years. But the number of sheep have fallen by 17% from their peak four years ago. Could it be due to a virulent ovine disease perhaps? Or a sudden collapse in the demand for woollen jumpers due to global warming? Well no, the answer is in Table 5 - Subsidies to Products. The value of subsidies to sheep fell from €106.6 million in 2004 to zero in 2007. The farmers were responding to prices all right - but they were the artificial prices created by CAP subsidies. I have often thought that if the CAP offered subsidies for camels then Ireland would end up with the biggest herd outside of Saudi Arabia.

Still, the good news is that farmers will respond to prices (and to the demise of subsidies). In the long run this can only mean a healthier food and agri sector driven more by consumer demand and less by vote-buying subsidies. The sooner the better - and then we might see an Irish food sector thriving despite the issues identified by IBEC.
Posted by Gerard O'Neill at Tuesday, June 23, 2009