Birth of The Recession 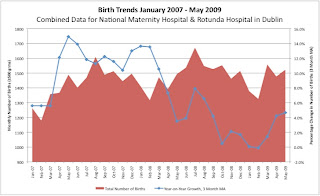 Literally? Does the trend in births indicate (albeit at a lag) the outlook for the economy? Brendan Walsh thinks so as he has shown a strong 3-quarters lag between the numbers unemployed and the number of births. That's using quarterly data. But what about other factors such as consumer confidence: given that the decision to have or not have children can be based on a mental image of the future?

I recently got hold of data for the monthly number of births in the National Maternity and Rotunda Hospitals here in Dublin. Kindly supplied by their respective information departments. The chart shows the trend in the combined total number of births since January 2007 (lefthand axis), overlaid with a three month moving-average of the percentage change (year-on-year) in birth numbers.

The first thing you notice is the seasonal pattern - see the separate analysis of this pattern here by my own company. Also it is evident that there has been a levelling out in birth numbers, clearly shown by the sharp decline in the growth rate. The rate of increase peaked in December 2007, though the actual number of births peaked in July 2008. From the summer of last year, the rate has fallen sharply - even turning negative. Though there is some evidence of a recent recovery (though the growth rate is still in low single digit percentages).

This doesn't make life any easier for those running and planning maternity services of course. If birth numbers are seemingly influenced by psychological/economic factors then forecasting future demand for maternity services (say 2-3 years out - after that demographic factors are probably more important) becomes an exercise in economic forecasting. Another reason why we might want to tread carefully with mooted changes to child benefit lest we risk futuricide.

At the end of the day, the invisible hand of population control will hold sway, but we don't need to increase the opportunity cost of becoming a parent any further surely?
Posted by Gerard O'Neill at Wednesday, July 08, 2009