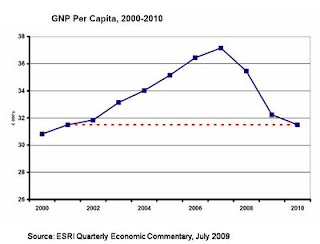 Never let a serious crisis go to waste. What I mean by that is that it's an opportunity to do things you couldn't do before. Rahm Emanuel

Yesterday's Bord Snip Nua report certainly smacks of using the present crisis to good effect. It also sets out how severe the crisis is: the government is borrowing €400 million a week just to meet it's working capital requirements. Coincidently the ESRI published it latest Quarterly Economic Commentary on the same day: the chart from the report paints the starkest picture of our predicament - by the end of the decade (i.e.: next year), our standard of living (GNP per capita) will be right back to where it stood at the start of the decade. What a waste.

The Bord Snip report has done Ireland's taxpayers a big favour in lifting the lid (or is a rock?) on some of the more egregious examples of waste and inefficiency in the public sector. Take, for example, this passage from Volume II on terms and conditions in Institutes of Technology:

The academic contract provides for an annual commitment of 560 hours, a weekly norm of 16 hours for lecturers (630 hours and a weekly norm of 18 hours for assistant lecturers). The contract also provides for an academic year that runs from 1 September to 20 June only, during which all work including exam boards and appeals must be done. The changing nature of academic institutions through semesterisation, modularisation, work placement and remote delivery has meant that the annual commitment is never delivered because of the weekly restriction. Some lecturers end up delivering less than half of their annual contractual commitment with the majority delivering in or around two-thirds. For example, in some cases a lecturer may have no further work from March until September because of student work placements.

... There is no contractual requirement to be on campus other than for delivering lectures and there is no system of accountability for the performance of non-lecturing duties.

... Non-academic staff in the IoT sector generally have more favourable conditions than their civil service counterparts as follows:
• shorter working weeks (as low as 32.5 hours);
• longer annual leave (up to 34 for Assistant Principal equivalent grades);
• with IoT’s closing for longer periods at Christmas and Easter, there are greater numbers of privilege/concession days (as well as entitlements to religious holidays in the case of some staff).

Stepping back from the details of potential savings (and there is a considerable amount of detail), there are other questions to be asked about the reasons we are now in this predicament and how we will get out of it. Firstly, there is a direct link between the Government's insane decision to guarantee all the deposits and all the bondholders of all the Irish banks last September with yesterday's report. As the preamble to the report makes clear, the Irish Government is now paying a significant premium on its borrowings to meet its operating costs because of international market concerns about the scale of the its exposure to the banks. As noted:

Consequently, Ireland is now in a position where we need to borrow more to fund a larger budgetary deficit, while paying higher costs for this borrowing. This means that ever increasing proportions of our tax revenues will be needed to service the national debt. In 2009 over 11% of estimated tax revenues will be used for this purpose, compared with a figure of about 4½% of tax revenues as recently as 2007.

Of course, even with a less 'ambitious' rescue of the Irish banks, the Government would still have struggled to fund its operations such has been the speed and scale of the collapse in tax revenues. But we might have had a little more leeway in relation to education, health and social welfare than is now the case. Nevertheless, economic reality is now compelling the Government to deal with the consequences of its own largesse than it might otherwise have had to in different circumstances.

A measure of that largesse is shown in the Department of Finance's Analysis of Exchequer Pay & Pensions Bill 2004-2009 published at the start of this week. It shows the extraordinary growth in the numbers and salaries of those employed in the public sector over the past half-decade. Its shows a gross increase in the pay and pensions bill of 40.3% since 2004, and in the numbers employed of 15.2%. All predicated, of course, on that GNP per capita line continuing to grow into the future. But it hasn't, and we need to ratchet back our expectations to something closer to the start of the century. The private sector have been doing that for some time (mostly through job losses and pay freezes, and occasionally through pay cuts). Social justice and fairness requires that the public sector shares in the adjustment. Which it will.

But all this is mostly bean-counting: the government is being forced by its 'bankers' (the bond market) to put its house in order by cutting costs so they are more in line with revenues (i.e.: taxes). What of the wider economic impact: will the implementation of the Bord Snip recommendations make a bad situation worse? The answer, as always, is that it depends ...

Firstly, cuts to public sector spending reduces the need for yet more tax increases (though we will have more once the Commission on Taxation reports in the next few months). This means that businesses and workers are more incentivised to earn additional income and generate more revenues - other things being equal. Remember, recoveries are mainly microeconomic phenomena. Moreover, different policy responses to recession impact on different parts of the economy. As noted in this paper recently which looked at four types of fiscal stimulus packages:

The authors simulated the impact of the four fiscal stimulus variants on the euro area: the chart indicates with an “X” the instruments that appear to be the most effective in relation to selected policy objectives, differentiating between their short‐run (ST) and medium‐run (MT) impacts.

Of course, the application of An Bord Snip's recommendations will be the reverse of a stimulus: instead of increasing public consumption it will be decreasing same. The 'good' news in this scenario is that the negative impact will be felt over the medium term - by which stage a global recovery might just help us avoid making a bad domestic situation even worse. Beyond that it seems that that national governments can do little to affect the long run growth rates of their countries anyway. As an extremely open economy our future fortunes will be determined elsewhere.

Though that will be of little consolation to those public sector workers made redundant - even if private sector workers will feel that the pain of our economic regression is being shared more equitably than it has been until now.
Posted by Gerard O'Neill at Friday, July 17, 2009