From Husbands to Handouts 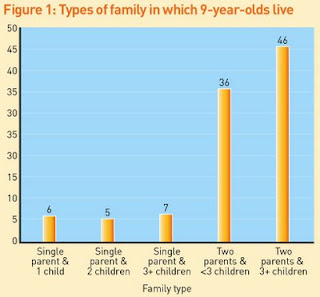 "What are you looking for in a husband?" Without batting an eye or pausing for thought, [the young Swedish woman] answered: "Three things. One, he must be good in bed. Two, he must be a good father. Three, when we divorce, he mustn’t be bitter." Jonathan Power

Yesterday saw the publication of the first results of the ESRI/TCD study Growing Up in Ireland. As with all such studies it reflects the cultural priorities and prejudices of its time. So, for example, report No. 2: The Families of 9 Year-Olds manages to discuss family life in Ireland without mentioning marriage. Not even once. As David Quinn has rightly observed, there is now an extraordinary cultural prejudice against the institution of marriage among academics and media commentators. Such that it is now airbrushed out of state-funded studies such as Growing Up in Ireland.

Like I said, a distraction from the main issue. And yes, I am in favour of the recent civil partnership initiative for same-sex couples: so now, can we get back to debating marriage for the 98% of the population who are heterosexual and the vast majority of whom will get married at some stage in their adult lives?

Except, we can't have a debate if we don't have any data - can we? The prevailing orthodoxy appears to be that assessing families in terms of marital status is somehow passing judgement on the 'choices' that individuals and couples have made. And passing judgement is the one, remaining sin in our secular age. Which is a pity really, because the continuing breakdown in parenting practices - driven by the rising incidence of births outside marriage (33% of the total in the most recent CSO data) - is a measure of the problems we now face, see chart below: 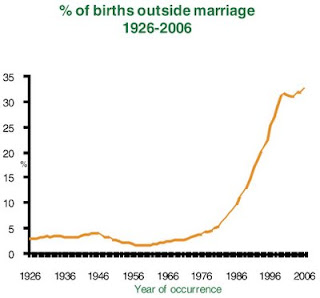 I can't help feeling that the fact that half of all births in Cork City and Limerick City are outside marriage just might - might, mind you - be responsible for some of the social, economic and criminal problems we are witnessing there (and elsewhere) on a daily basis? But there I go - passing judgement again, tut tut.

In the United States the incidence of births outside marriage has now risen to 40%. Nor is this just a function of lifestyle choices and shifts in cultural mores about pre-marital sex. It is also a consequence of deeper shifts in terms of economic independence for women and the substitution of state handouts for husbands for many mothers not in paid employment. As Robin Hanson has recently noted, it also means a reversal of the historical arrangement whereby most men had access to regular sex via monogamy, and its replacement with one whereby a minority of alpha males 'monopolise' sexual access.

Roissy in DC takes it further, of course: he thinks America's destiny is to become more like Sweden - one in which most women view relationships with the fathers of their children as a temporary arrangement (not unlike the young woman referred to in the quote at the top of this post). An arrangement only made possible by the continued substitution of the state for husbands in a growing number of families.

All of these issues are, naturally, outside of the mainstream discourse on family life in Ireland. One that doesn't even like to use the word 'marriage' in state-funded studies of contemporary family life.

Instead we are left with the demographic car crash now under way thanks to the unwillingness and inability of political, religious and cultural leaders (and not just in Ireland) to speak forcefully and convincingly in defence of heterosexual marriage as the best arrangement for raising our nation's children.