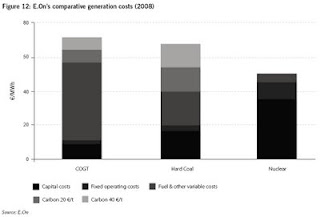 The British are increasingly worried about their energy security. We should be worried too. One (more) consequence of the credit crunch has been the mothballing of various plans by major energy companies like RWE and E.On to invest in new electricity generation capacity in the UK. Just as the UK needs to be rapidly expanding its capacity (which we will benefit from as well).

The figure is from a new report by Nigel Hawkins for the Adam Smith Institute - Re-Energizing Britain. Hawkins argues that the belated u-turn on building nuclear power stations to replace those now being de-commissioned came rather late. Not least because the capital cost of building nuclear power stations is substantially higher than coal and gas power stations (even if the generation costs are lower when up and running). And right now, raising billions for investment in power stations is even more difficult than it used to be. Hawkins worries that the German and French power companies now dominant in the UK may look to other countries to invest (including Germany if its ban on new build nuclear power plants is lifted as some have suggested).

Building smaller nuclear power stations doesn't solve the problem either - a false economy, as noted in this analysis of micro-nuclear. Though I like the Russian innovation of building a floating nuclear power station - I wonder could we float one into Dublin Bay on those occasions when the wind doesn't blow?

I look forward to a growing emphasis on more efficient and effective energy generation technologies in coming years. As a recent paper on How to get climate policy back on course (pdf) points out, target emissions setting strategies such as Kyoto have failed - and will continue to do so. What is needed an engineering focus on decarbonization which directly addresses the main source of CO2 emissions (and pollution in developing countries): namely the provision of heat and light, mostly via electricity generation.

And who knows, by doing so we might even shed more light than heat on our own tortuous energy 'debate' here in Ireland.
Posted by Gerard O'Neill at Wednesday, July 15, 2009