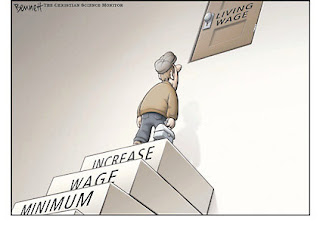 The minimum wage has been described as a maximum folly by its critics, for good reason. The noble intention is to lift the working poor out of poverty. Who could be against that? The problem is, most of the people on the minimum wage are not 'poor' in a household or family income sense. Bear in mind that only a tiny minority of employees are on the minimum wage in the first place (1.6% of industry workers, for example - see table 10 pdf), and that there are several derogations for young people and apprentices.

In truth the minimum wage has become one of those totemic issues - support for which is a badge signifying you really care - that has no bearing on the reality of poverty as it is experienced by those actually in poverty. That's not to say that raising the real value of the minimum wage (achieved by keeping it constant against a background of deflation) might not contribute to poverty in the future. As one assessment of the economics of the minimum wage points out:

The unspoken, cynical truth about the minimum wage, as noted by Stephen Landsburg, is that it is more politically expedient to impose a minimum wage on a minority of employers than to impose taxes on the majority of taxpayers:

By contrast, the minimum wage places the entire burden on one small group: the employers of low-wage workers and, to some extent, their customers. Suppose you're a small entrepreneur with, say, 10 full-time minimum-wage workers. Then a 50 cent increase in the minimum wage is going to cost you about $10,000 a year. That's no different from a $10,000 tax increase. But the politicians who imposed the burden get to claim they never raised anybody's taxes.

If you want to transfer income to the working poor, there are fairer and more honest ways to do it. The Earned Income Tax Credit, for example, accomplishes pretty much the same goals as the minimum wage but without concentrating the burden on a tiny minority. For that matter, the EITC also does a better job of helping the people you'd really want to help, as opposed to, say, middle-class teenagers working summer jobs. It's pretty hard to argue that a minimum-wage increase beats an EITC increase by any criterion.

It seems clear: neither A nor B but C.