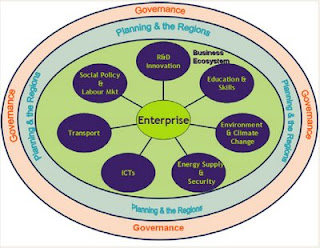 The challenge for the State is to steer economic and social endeavour towards objectives of improved living standards, well-being, quality of life, social cohesion and inclusion, and environmental sustainability. Sharing Our Future, p.125

It isn't actually. The challenge for those temporarily in charge of the State is to avoid getting in the way of those individuals, businesses and communities who - through their own endeavours - are raising our standard of living, our quality of life, and improving our environment. Though I don't hold out much hope for that given the tone of the new report from Forfás: Sharing Our Future: Ireland 2025 - Strategic Policy Requirements for Enterprise Development. The report signals a profound leftward shift by our political masters towards a more dirigiste approach to policy development for Ireland. Take this extract from page 117:

There is a need for greater debate on Irish values, society and the economy as we emerge from the current crisis that should include redressing of the balance between a strong economic emphasis and the possible adoption of a more northern European model of society. Mechanisms should be developed to create shared perspectives, encourage collaborative and collective responses at local and national levels, examine how to enable ownership of responses to big issues and involve people and enable them to see the impacts etc. Consideration should be given to the development mechanisms for community engagement as occurs in other countries that have compulsory military or community service to revive social cohesion, as well as to address emerging environmental and security issues.

Sounds like we're turning distinctly Scandinavian. That said, the report itself is a useful summary in one document of a lot of prevailing thinking about a host of issues from demography to energy, from regulation to innovation. It even sets out four interesting scenarios for Ireland's long term future in the appendix - a methodology I have noted before.

It follows the same style and tone of most such 'futures' reports from organisations like Forfás: full of 'musts', 'shoulds' and 'oughts' - mostly re-cycled from many previous studies and commentaries published by Forfás. Mind you, the following passage certainly stood out from the usual, 'neutral' tone (also page 117):

There is a need to understand and encourage the longer-term debate as Ireland moves from a relatively closed and poor society to a wealthier and outward looking society, more open to international trends and with more flexibility in both social and cultural terms. This could be done by encouraging the development of wider aspirations and more inner directed self actualisation values, by debating how to replace traditional organising principles and by discussing alternative options for meeting spiritual needs.

The fundamental problem for me, however, is the assumption running through the report that the State is capable of foreseeing the future and then steering economic and social developments accordingly. The schema above copied from the report captures this conceit perfectly: the world of business (the economy) is enveloped in the guiding embrace of planning and governance (the state).

I don't think so. William Easterly gets to the heart of matter in a commentary on Pope Benedict's recent encyclical. Easterly notes the predilection of the Pope, politicians and policy makers generally (including Forfás it seems) to fall for the Man in Charge fallacy:

This a fallacy simply because: there is no Man in Charge of the global economy. There never has been, and there never will be. There is no Man in Charge of any national economy either. This is not about the debate about the role of government vs. markets, this is simply a statement of fact. There are government leaders, to be sure, but they are only one among many different power centers in the political system, society, and in the economy, all with sharply conflicting interests and tools to effect change, and so any individual leader has very limited power to change things. This is true of both authoritarian and democratic systems. You may want one of those leaders to act on a particular problem, which is fine, but you should not think that leader is the Man in Charge.

Easterly then goes on to a make a point about economic development strategies that goes to the heart of the Forfás approach:

The Man in Charge fallacy contaminates much of the discussion in development economics. There is an endless search for the right comprehensive strategy to end global poverty, or to achieve national economic development. Such a search only makes sense if there is a Man in Charge, which there isn’t, who would have the power to implement The Strategy. Once you realize that all power is partial, you seek ways to achieve incremental beneficial changes and you end the unproductive search for the Complete Grand Plan to solve the problem all at once.

So why do we all fall for the Man in Charge fallacy?

We like to anthropomorphize a complex system of multiple power centers, bottom-up social norms, and spontaneous markets, innovators, and entrepreneurs, because it is scary to think of such a complex system with no Man in Charge.

There you have it: the role of the Forfás report is to give the impression that 'someone is in charge' and that 'someone has a plan'. Don't get me wrong: there is some value in this - not least because the Forfás report invites us to raise our gaze above the day-to-day fallout from the economic crisis we are going through. It even provides a sense of hope as it points to a future that is much better than the present. I for one am grateful for any such efforts in these difficult times.

Nevertheless, we need to be grown up about the future. I take my cue from Kevin Kelly (yes, I do read others but he is very good!) when he notes that the future - be it our own personal future, that of a technology, or that of the human race as a whole - is subject to three distinct forces:

In addition to the primary drive of preordained development (force #1), and in addition to the escapable influences of technological history (force #2), there is society's collective free will in shaping the technium (force #3). Under the first force of inevitability, the path of technological evolution is steered by both the laws of physics, and by self-organizing biases within its large complex adaptive system. The technium will tend toward certain macro forms, even if you rerun the tape of time. The path of the technium is further constrained by the second force created by the momentum of past decisions, or technological history. At any moment of technological conception what happens next is contingent of what has already happened, and so history constrains our choices forward. These two forces channel the technium along a limited path, and severely restrict our choices. We like to think that "anything is possible next" but in fact anything is not possible in technology.

In contrast to these two, the third force is our free will to make individual choices of use, and collective policy decisions. Compared to all possibilities that we can imagine we have a very narrow range of choices. But compared to 10,000 years ago, or even 1,000 years ago, or even last year, our possibilities are expanding. Although restricted in the cosmic sense, we have more choice than we know what to do with. And via the engine of the technium, these real choices will keep expanding (even though the larger path is preordained).

I like his idea of expanding choices made possible by the accumulating outcomes of choices made by our predecessors. The future will also be the outcome of the many choices freely made by individuals, businesses and communities today and tomorrow - not those of the Man in Charge. For that we should be grateful: that is how we got here in the first place (and Ireland in 2009 is still a much, much better country than it was 10, 50, or 100 years ago). And it will be even better in 2025 because of that freedom.