Should We Envy Albania? 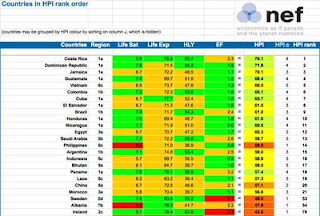 You know things are bad (as in, off the scale horrendous) when a new study compares Ireland less favourably to Albania. But before you go buy your one way ticket to the people's paradise of Tirana, it might be worth drilling into the numbers a little more first.

The study - The Happy Planet Index - is from the New Economics Foundation. They have created a composite index (the HPI) that is derived from measures of life satisfaction, life expectancy and a measure of a country's ecological footprint. The HPI is then derived from a combination of these three variables. The higher satisfaction/expectancy the better - and the lower the ecological footprint the better.

As with all such indices - derived from data not originally gathered for the purpose of generating any particular index - you do tend to get some strange anomalies. Like Costa Rica topping the list (and there isn't a single European country in the top 20), and Albania scoring much better than Ireland (along with Eygpt, Saudi Arabia, Cuba and a few other surprise 'winners').

Somebody once said about the United Nations' Human Development Index that it is a measure of how 'Scandinavian' your country is. In other words, what gets measured gets compared. Still, it is reassuring to see Sweden coming out ahead of Ireland on the HPI ranking (even if it ranks a lowly 53rd in the world!) given how the natural order of things is to always compare us unfavourably with Scandinavia ... ;-)

A lot of the messages that NEF take from their HPI ranking are harmless enough. Their Manifesto for a Happier Planet on page 48 of their report identifies the role of alleviating poverty and improving the environment in terms of making people happier. Though their nostrums about 'the evils of consumerism' might date somewhat as the recession bites.

But I would suggestion one possible improvement to their index: add in net migration statistics for each country - immigrants minus emigrants. Those with negative scores (more emigrants than immigrants) would presumably be countries that are not such great places to live? I'm guessing that Cuba might not retain its position at number seven in the world, for example.

Mind you - Ireland might not do too well on that measure either come to think of it. I wonder will Ryanair be opening a route to Tirana any time soon?
Posted by Gerard O'Neill at Monday, July 06, 2009