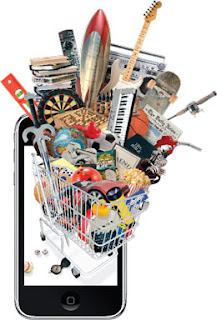 I admit I'm a bit of a techno-fetishist. There, I've come out. I've been playing with my new iPhone and yes, it's brilliant. Better even than my iPod Touch. There are limitations of course: the battery life for one (dire), and the camera is a pale imitation of my much loved Nokia N95.

But the biggest delight is the App Store: I'm playing with a few different ones at the moment (a mix of free and paid-for), including WorldView (live streaming of web cams from locations all around the world), and, of course, Bloom. I let my four year old niece play with the latter at the weekend and within 30 seconds she had turned the phone around to a landscape position and was playing it like a piano. I hadn't thought of that - scary how quickly the stuff I think is amazing becomes an easily used plaything for children ...

I got the boxed set of the original Star Trek series as a birthday present recently (thanks sis!) Every time I watch it I think of Arthur C. Clarke's adage about a sufficiently advanced technology being indistinguishable from magic. Only I'm looking at the delightfully clunky 'future tech' used by Captain Kirk et al and I'm thinking that if I beamed back an iPhone to the 1960s when the original series was made it really would seem like magic. (Okay, I'd also have to beam back the internet and a 3G phone network, but just use your imagination).

What is different about the iPhone is the sense that it represents a radical breakthrough in terms of how you think about and use a technology previously limited to voice, sms and a few photos. Some already think that the app market could grow as big as the web. Check out a brilliant report on Mobile Megatrends 2009 here if you are as geekish about this stuff as me ;)

But it will go much further. Idris Mootee is right to propose that the future will be less about gadgets than how they are used. As he puts it:

The future is not more gadgets, but more integrated and modular designs. We will see a wide variety of innovative tools and apps that will emerge to help us leverage the information glut to our benefit. These new devices, systems, and services will enable us to alleviate the symptoms of cognitive overload and compensate errors and weaknesses in everyday life human decision-making. Much like a pilot relies more and more on computers to fly planes, technologies will allow us all to become smarter.

More than that, the ubiquity, affordability and efficiency of a mobile enabled global society just might be a key enabling technology in taking us to the next level, i.e.: towards a Type 1.0 Civilisation, one characterised by:

Globalism that includes worldwide wireless internet access, all knowledge digitized and available to everyone anywhere any time, a global economy with complete open economic borders and free markets where anyone can trade with anyone else without interference from states or governments, and where all states are democracies in which everyone on the planet has the franchise.

Of course, we still have to manage the energy transition to get to that happy outcome. And as a brilliant essay on Peak Civilisation: The Fall of the Roman Empire reminds us, you kind of have to make the transition because if you're not going forward then you'll end up going backwards.

Though that'll take rather more than a longer battery life ...
Posted by Gerard O'Neill at Wednesday, July 22, 2009