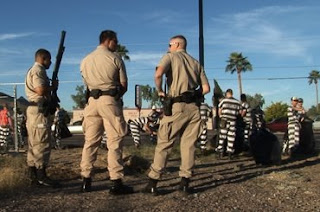 I finally got to see the documentary The War on Drugs, broadcast recently by RTE. I only wish the 22 members of the Council of State had watched it before advising President McAleese ahead of her signing the Criminal Justice (Amendment) Bill into law last week.

The message from the documentary is very clear: a war on drugs pursued by the state pretty soon becomes a war on its citizens. It's a war that can't be won, and a war that never ends. Perpetual war.

As with all such measures in other countries there is something initially appealing about the proposed changes to the law. Who could be against protecting witnesses? Or punishing the crime bosses and not just their pawns? And who could be against helping the Gardai to be more effective at their job? But it doesn't stop there unfortunately. As the Irish Council of Civil Liberties points out in their own critique of the bill:

This climate is all too familiar to that which preceded the introduction of measures to deal with organised criminal activity in the Criminal Justice Act 2006. However, it is questionable whether a similar response, such as that which is being proposed by the Government, will in fact, have any significant effect in reducing organised criminal activity.

The use of special powers to deal with organised criminal activity tends to lead to the normalisation of these measures and emergency powers remain available (and used) even after a stated emergency has ended. Gradually they distort the tone and ethos of the criminal justice system by extending state powers.

As The War on Drugs makes manifestly clear: no amount of legalistic innovation is going to stop the formation and perpetuation of drug gangs and the industrial scale criminality that goes with them for so long as we choose to maintain a prohibition on the production, distribution and sale of certain substances but not others. What this means, unfortunately, is that a future Minister for Justice will be back asking the President to sign yet another piece of draconian legislation into law as once again our police, our judicial system and our communities are overwhelmed by the consequences of prohibition.

As AC Grayling pointed out in his own critique of the bill:

Authorities in all countries and at all times, even in Western democracies, find themselves inconvenienced by civil liberties, which make the job of policing society more difficult. In particular, and to the great irritation of governments everywhere, civil liberties interfere with authorities’ ability to detect, arrest, prosecute and convict bad people. But there is a good reason why civil liberties make the work of the authorities more difficult: to protect the great majority of people who are not bad. The inconvenience of the authorities is the freedom of the people, and it is a price worth paying.

On the other hand, compromising the freedom of the people for the convenience of the authorities will cost us dearly indeed.
Posted by Gerard O'Neill at Monday, July 27, 2009