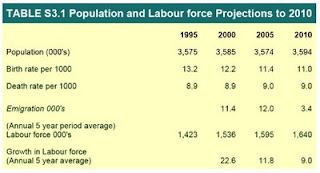 There's a lot of sense in today's Technology Actions Report from the government. The technology ambitions are focused and modest (testing a new technology here, rolling out a more developed one there) rather than vague and over ambitious. The same cannot be said, alas, for the job ambitions which are just silly and distract from the otherwise sensible and perceptive thinking in relation to the technology.

I can never understand why politicians need to be seen to be 'job creators' - when plainly they are not (job destroyers maybe, but we'll not go there today). As the press release puts it:

With 6 new and innovative plans for Government action and infrastructure development, the report identifies 30,000 jobs as a baseline target for achievement over the next 5-10 years.

6,000 jobs a year. Or maybe 3,000. And how will they know? Half the jobs appear to be in that magical category of 'indirect jobs' created by some undefined multiplier effect (though maybe it is defined: the rule of thumb appears to 1 indirect job for every direct one). I can't prove it's wrong ... and they can't prove it's right. Mind you, it's beginning to look like they'll have to create 60,000 jobs if we're going to end up with a net increase of 30,000. On the same day that Minister Ryan proudly announced that InTune - an exemplar smart economy company - will sort of, kind of probably create 300 jobs over the next 3 years'ish; Intel announce that they're getting rid of 300 jobs. This year, for definite.

My point is not to diss politicians' forecasting ability (okay, maybe a little), but rather to point out how utterly meaningless and distracting they are. The bottom line is that nobody knows - not me, not the minister, not the report writers. Nobody. You only end up looking silly - like the folks who wrote the 1996 report Shaping Our Future - from which I've lifted their key labour market and population forecasts for 2010. From the vantage point of 2009, every single forecast looks set to be wrong. Every one of them. And yet I don't doubt the authors tried hard to call it as best they could with the information and knowledge they had available at the time.

Don't get me wrong, I understand that in the current climate we all need to be hopeful about the future. Including prospects for jobs and for the economy in general. But could we just have a moratorium on silly, vague, unverifiable job forecasts arising from this or that initiative. And just concentrate on making sure they're the right initiatives instead? Please.