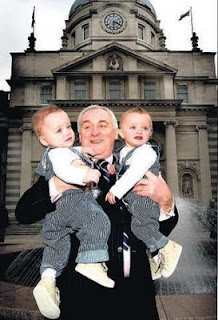 The news today that Ireland's birth rate (or total period fertility rate, to be precise) is back to a level that means our population won't decline is very welcome indeed. The record number of births reported by the CSO for Q4 2008 is a measure of a healthy society - regardless of the state of the economy.

Of course, these are very much Bertie's Babies. The result - so to speak - of the economic boom presided over by Bertie Ahern, who managed to get out just ahead of the collapse. But as I've noted before (using monthly birth data) there is a strong correlation between consumer confidence and birth trends, so the Q4 2009 results might not be as positive when they are reported next year.

Having babies is (usually - in these days of ubiquitous contraception) a vote of confidence in the future. And as Akerlof and Shiller remind us in their book Animal Spirits:

... Changes in these stories will affect the expectations for personal success in business, for the success of entrepreneurial ventures, and for payoffs to human capital investments.

... Just as diseases spread through contagion, so does confidence, or lack of confidence. Indeed confidence, or the lack thereof, may be as contagious as any disease. Epidemics of confidence or of pessimism may arise mysteriously simply because there was a change in the contagion rate of certain modes of thinking.

And babies are as big an investment in human capital as you can make. Shiller has picked up on this theme again in a recent op ed in the New York Times, when he notes about current talk of 'green shoots' that:

All of this suggests that a social epidemic is supporting renewed confidence. This confidence can keep growing by contagion, as a kind of self-fulfilling prophecy, and we may see the markets and the economy recover further.

Still, there is something inspiring in the CSO's births data. We don't have to revert to being "a kind of mental repository for melancholy, a place upon which we can all apply our fantasies, woes and laments". We can change the story: change it to one in which we get through our present difficulties and see to it that the generation born of the boom grows up wiser than their parents, but also ambitious to make the most of the legacy we bequeath them.
Posted by Gerard O'Neill at Monday, August 31, 2009