The Economics of Denial 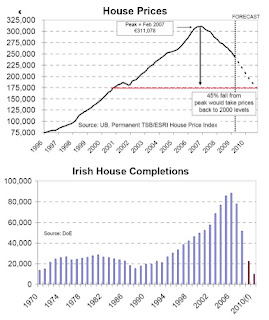 I guess it shows how punch drunk we are from economic shocks that Ulster Bank can blithely forecast a 45% fall in house prices from their peak - as they did in their Irish Economy Commentary last week - and most people shrug in acceptance. Not even their forecast of just 10,000 house completions next year (down from 90,000 only three years ago - see chart) caused much of a stir.

But not everyone is so accepting and indifferent. Those selling their homes right now are probably more than a little concerned about housing and house price trends. Partly the concern is that of negative equity - a worry I have considered to be overblown in the past. Others are perhaps less sanguine than me about the extent of negative equity - Ronan Lyons for one, as well as Liam Delaney.

Of course, a key question is just how much are houses worth right now, especially those actually on the market? Sellers will likely have a higher price in mind than buyers: up 10% and even more in the US, for example. What's interesting, however, is that when you bought your house has a big bearing on what you think it's worth when you subsequently come to sell it, even many years later - as identified in a fascinating study by the Levy Economics Institute:

Our results show that homeowners, on average, overestimate the value of their properties by between 5% and 10%. We also find that the overestimation is mostly related to capital gains, while owners tend to accurately translate the original price that they paid for the house into the home’s current market value. There is, however, considerable variation depending on when they bought their homes. This points to the persistence of the economic fundamentals surrounding the time that individuals decide to purchase a home at a given price, which ends up reflecting in the self-assessed valuation of that property close to the time of the sale.

While most individuals overestimate the value of their properties, individuals who bought during more difficult economic times tend to be more accurate and, in some cases, even underestimate the value of their houses. We find a strong correlation between accuracy and the economic conditions (measured by the prevalent interest rate, the growth of household income, and the growth of median housing prices) at the time of the purchase of the property. Those who bought during tougher economic times are, on average, more accurate in their assessments.

The Levy paper authors even think this might explain why so many have ended up in negative equity:

Our results provide some explanations for the difficult situation currently faced by a growing number of homeowners. The pattern that we document is consistent with the buildup of unrealistically optimistic expectations regarding the rate of home price appreciation among individuals who bought in good economic times or times of loose credit. In turn, these individuals take on risky financial commitments that make them more dependent on price appreciation to build equity in order to accommodate an adverse event, such as an increase in interest rates.

Right now those 'unrealistically optimistic expectations' might related to the rate of house price depreciation of course ...

This does suggest that if you are a home buyer then you might want to just focus your attentions on those houses that have been owner-occupied for some time - ideally since the economically depressed 1980s. And if you can't find a reasonable seller you can always just follow the New American Dream and simply rent. If the Ulster Bank forecasts are correct then prices may well be even lower this time next year.
Posted by Gerard O'Neill at Wednesday, August 26, 2009