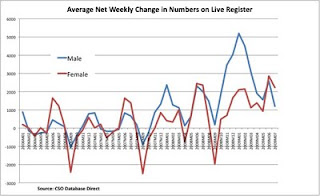 I've noted before that there seems to be a distinct gender bias in our current recession, but now I'm not so sure. Maybe it's just a matter of timing: men got hit by the recession first (see chart), but now it's the women's turn (as indicated by average weekly net changes to the live register these past few months).

Still, the expected trajectory of the global recession is expected to be a 'he-cession' when it's all over, resulting in The Death of Macho:

The great shift of power from males to females is likely to be dramatically accelerated by the economic crisis, as more people realize that the aggressive, risk-seeking behavior that has enabled men to entrench their power—the cult of macho—has now proven destructive and unsustainable in a globalized world.

What will this post-macho world be like? Some talk about the emergence of a 'she-conomy': a new economic order in which women make up the majority of the workforce and are increasingly the main breadwinners as married/co-habiting men lose their jobs. But others are not so sure (nor am I): as the always insightful blogger Whiskey notes about the New Girl Order:

Much of the new girl order is discretionary spending, on things such as fashion and cosmetics than can be stretched out, or used up. Belmont Club has links to various economic predictions of either inflation on a massive scale, debt repudiation, or perhaps both. Regardless, states like California, can no longer afford to simply keep government employment up, particularly when the stimulus money runs out in 2010. The the female-friendly employment in Health, Education, and Welfare, will be hit along with the far more sensitive resource extraction, construction, transportation, and manufacturing sectors that generated most of the layoffs, ala the Mancession. Government employment does not generate its own income stream, and depends on the larger economy for tax receipts. The current economic picture does not look good.

As governments the world over struggle to get budgets back into balance post the recession, it may be women who lag behind men as we move into recovery because sectors such as technology and energy (still predominantly male) will lead a return to economic growth.

Even if the she-conomy is more a figment of some commentators' imaginations, there is one aspect of the gender impact of the recession that is more real, namely in developing countries. Traditionally economic development has seen women and men move from agricultural employment to employment in factories and construction. But the worldwide recession has had a devastating impact on both categories of employment - especially for women working in factories supplying markets such as the United States.

It looks like being an 'equal opportunity' recession after all.