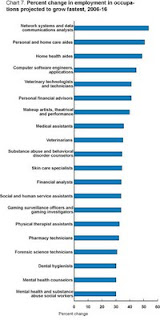 There you go: another 57,500 certified young people. I congratulate them all. Now what? IBEC is fretting that the numbers of students taking higher level maths and subjects with higher maths requirements are lower than before. But does it really matter?

A recent US study projecting the fastest growing occupations to 2016 (see chart) suggests that some of the biggest increase in labour demand will be for care aides, makeup artists and 'substance abuse and behavioural disorder counselors'. Not a lot of higher maths requirements there ...

But even these jobs may be endangered (and not just because of the recession). Gregory Clark is fretting not about the recession but something else:

No, the economic problems of the future will not be about growth but about something more nettlesome: the ineluctable increase in the number of people with no marketable skills, and technology's role not as the antidote to social conflict, but as its instigator. The battle will be over how to get the economy's winners to pay for an increasingly costly poor.

The robots replace the low skilled workers in Clark's scenario. Nor does he think that education will solve this problem:

Others see education as a way out of this dystopia. The root problem is, after all, the widening of the income gap between the skilled and the unskilled. Can expanded education give the poorest the tools to resist the march of the machines? I'm skeptical. Already, much of the supposed improvement in high school and college graduation rates has come by asking less of graduates. We can certainly arrange to have everyone "graduate" from high school, but whether they will have the skills needed to make it is doubtful.

He's not the only one fretting about 'grade inflation' - or about a legacy of ruin which will see too many school leavers go on to university as part of dubious targets rather than acquire more useful skills. But maybe we fret too much? Maybe a future of 'redundancy' is something to be welcome, given that much the same forces has given us the immensely richer and more materially equal world that we have today? Will Wilkinson thinks so:

If robots can crowd out all low-skilled workers, there is no reason they cannot also crowd out all high-skilled workers. Would this be bad? Growth would proceed so rapidly that the returns to even small amounts of capital should be outrageously high. The gap will be between those with income from capital gains and those with none. To prevent this, some version of Clark’s recommendation might be desirable. I’d recommend Charles Murray’s scheme for replacing the United States’ social insurance apparatus with basic income grants and mandatory retirement and medical savings accounts. In a world of doubling-every-fifteen-minutes Hansonian robot growth, the portion of GDP necessary to fund universal grants sufficient to ensure a modestly lavish level of consumption would be so trifling that no one would even notice. For now, we should try to hasten the arrival of this post-human economy, in which case we should try to optimize incentives to innovation and growth.

He's right of course: the key is the productive potential of innovation. But innovation does not mean a fixation with post-doctorate researchers in universities. As Richard Tol points out:

So those who bring some innovative zest to the role of care aide, makeup artist or 'counselor' might well do more to grow the economy and improve productivity than any amount of higher maths inspired pure research.

Not that any of this will be of much consolation to those whose results today leave them with fewer CAO options than they had hoped for. But life opens up other options too - be open to that.
Posted by Gerard O'Neill at Wednesday, August 12, 2009