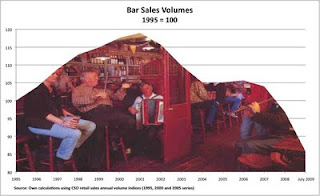 What do you think is "the most acute social problem in Ireland at this juncture"? Unemployment perhaps, or access to adequate health care, or maybe homelessness? No - if you are Dr Michael Loftus then the most acute social problem facing the country is the fact that the young people drink too much. That's according to his piece in today's Irish Times demanding that the powers-that-be "stand up to the drinks industry".

Really? I've a suggestion for Dr Loftus - there's no need to stand: the drinks industry in Ireland is on its knees reeling from one blow after another. The volume of sales in Irish bars - according to my own calculations using historical CSO data and the latest July volumes indexed to 1995=100 - peaked in 2001 and haven't just fallen back since, they've even fallen back to levels last seen in the early 1990s (allowing for slight chances to the NACE code classification of bar sales).

If this is the result of a rampant, uncontrolled, self-regulating Irish drinks industry - as Dr Loftus would have it - then let's face it: they're doing a crap job. In reality, these trends have little to do with the manipulations of the drinks industry. Rather it's down to demographics (the number of beer-swilling 18-24s peaked around 2001); economics (the relative price of booze in the off-licence is an awful lot lower than in pubs); and legislation (drink driving laws has had a sobering effect; and the smoking ban didn't help either).

Still, Dr Loftus insists that, as a former county coroner and practising GP, "I have known too many families bereaved by drink-driving, too many victims of alcohol-related violence, too many alcoholics and the families of alcoholics whose lives have been devastated by this most destructive and freely available drug." I don't doubt it: people with drink problems tend to see a lot more of their GPs than those who don't. Just as I have a relative who was once in the drug squad and every time he passed someone standing on a street corner he immediately assumed they we're dealing. Now I don't doubt one or two were indeed 'known to the Gardai', but I think most of them were just waiting to cross the road ...

The problem with the approach of Dr Loftus and other neo-prohibitionists like him is that they don't care for the majority of alcohol drinkers who actually benefit from alcohol consumption. Instead they would control and deny access to alcohol to the majority of Irish citizens (and its legitimate promotion by those supplying alcoholic beverages) in order to tackle the problems of a tiny minority of alcohol drinkers.

An even bigger problem for the neo-prohibitionists is that they 'protest too much'. The problem of alcohol abuse in Ireland is a rapidly declining problem - as I've noted before in relation to the SLAN survey of health and lifestyles. Most of their cost-benefit analyses of alcohol consumption tend to leave out the benefits, and to assume that all the costs are social costs borne by the health and welfare services and ultimately by the taxpayer.

Such was the claim of the recent BERL report in New Zealand, which was rightly criticised for its one-sided 'cost-only' analysis of the consequences of alcohol consumption. The usual implication of such reports is that the goverment should raise taxes on alcohol: indifferent to the fact that such policies end up punishing the vast majority of drinkers who enjoy considerable benefits from light to moderate consumption. Ironically, by doing so, responsible drinkers will cut back on alcohol consumption thereby reducing the benefits of same, and end up in the long run demanding more of the health services than would otherwise have been the case!

Moreover, those like Dr Loftus who would prevent alcoholic drink companies from sponsoring sports events etc simply assume that the considerable amounts of money that such sponsorships provide to sporting bodies such as the GAA and IRFU will magically appear from elsewhere. I don't think so - not in the current economic climate anyway. But if they succeed then expect even more demands on the taxpayer as Ireland's sporting bodies struggle to meet the costs of providing national, regional and local resources to children, youths and adult participants.

Which will leave us with yet another 'unforeseen consequence': less sporting activities for young people and a worsening of the already serious problem of childhood (and adult) obesity in this country. Now there's an acute social problem in the making ... unforeseen of course.
Posted by Gerard O'Neill at Monday, August 17, 2009