Saved By the Middle Class 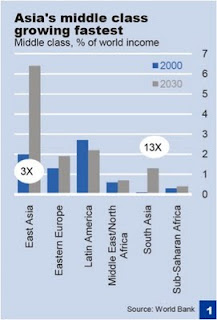 Maybe not in Ireland, but certainly in the developing world - at least according to a new paper (pdf) by DB Research (whence the chart). Talking about Emerging Asia's Middle Class might seem a tad heroic in the midst of a global economic meltdown, but Deutsche Bank's economists make a compelling case:

There are two reasons for Asia’s better prospects. One: faster population growth in South Asia means that these countries’ middle classes are growing more quickly. Two: although the population in East Asia is growing more slowly than in other regions, its annual per capita income growth is much higher (almost twice that in Sub-Saharan Africa) so it will still increase its share of global income in that time frame. The burgeoning of Asia’s middle class makes it an important consumer market, an engine of economic growth in the region, and an important global political force.

They even think that Asia's emerging middle class will eventually take over the consumer-spending-as-global-economic-engine mantle from the United States in due course. Though not any time soon.

A similar theme emerges in a recent guide to China's MegaTrends: trend number 3 is the rise of China's middle class. By 2050 the average Chinese citizen is projected to have the same standard of living as an Eastern European. The future (still) belongs to the Middle Class, even as large swathes of Ireland's middle class experiences upward then downward social mobility in a single generation.

Still, there'll be a big demand for English-speaking, well-educated nannies for all those middle-class children in Asia I guess ...
Posted by Gerard O'Neill at Monday, August 24, 2009