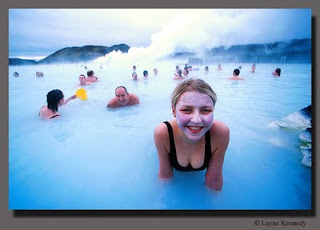 Chatting with some folk yesterday we were semi-congratulating ourselves that at least we didn't go down the economic road pioneered by Iceland after all. But maybe our self-congratulations are premature? That's certainly the message I took away from a piece on Iceland in today's FT by Robert Wade which notes that things are about to turn more painful for Iceland:

First, the freeze on mortgage repayments is due to end in November. The fifth of mortgages that are in yen or Swiss francs face a doubling of payments. Krona mortgages also face big increases in payments because they are tied to the consumer price index, which has shot up with the krona’s collapse. House prices are down 20 to 30 per cent, leaving many with houses worth only half the mortgage. The government asked the nationalised banks to show leniency, but repossessions will probably jump after mortgage payments are unfrozen.

Second, government spending, sustained so far by heavy borrowing, is due to be cut 20 to 30 per cent later this year, affecting health, education, social security and infrastructure. A wide range of taxes will be raised to try to eliminate the budget deficit by 2013.

... Third, the capital controls that have protected against capital flight are to be eased as part of the process of financial reintegration; but at the cost of high interest rates, currently 12 per cent, which choke investment.

Nasty: but at least we don't have to take the IMF medicine here in Ireland. However it was this line in the article that caught my attention:

If the government accepts British and Dutch terms, Iceland’s taxpayers will take on an Icesave debt equal to half the country’s 2008 GDP.

At least we dodged that bullet, right? And that's when it struck me: NAMA is our Icesave. Still, we can always learn to laugh at our difficulties like the Icelanders:

Q. What do an Icelandic bank and Icelandic streaker have in common?

A. They both have frozen assets.
Posted by Gerard O'Neill at Thursday, August 27, 2009