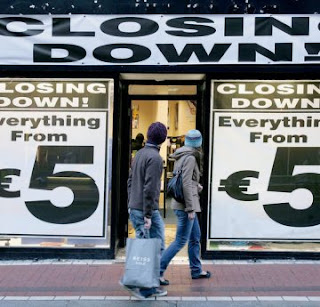 Today's CSO releases on July's consumer prices and June's retail sales were a double-blow for those hoping for green shoots in the late summer light. Ireland continues to have the severest deflation in the EU (a harmonised index decline of -2.2% year-on-year, and accelerating consumer price deflation overall); whilst the volume of retail sales fell by nearly 10% in the year to June.

That said, the onset of deflation is simply reversing previous inflation across most consumer spending categories, returning prices to levels seen 1, 2 or more years ago. The folks at the CSO kindly sent me detailed historical data for the CPI Detailed Sub-Indices (mid-December 2006 base) and some of the trends are quite amazing.

The overall CPI index is now back to where it was in March 2007 (having peaked in September 2008), but other sub-indices have seen sharper - much sharper - contractions, including:
These are just a few examples. Not all indices and sub-indices have fallen of course. Practically every government product or service (car tax, driving licence, tv licence) has moved - and continues to move - inexorably in one direction i.e.: up. Services generally continue to maintain their price levels (especially health and insurance/financial related).

But overall, deflation has certainly meant that consumer spending power is now going a lot further. Only problem is consumers are not spending - witness the retail sales data. Right now it isn't value for money or incomes that are holding consumers back (even allowing for unemployment and rising income taxes), rather it is fear. Fear that the money they have available to spend today may not be there tomorrow.

The question is: at what point do the 'bargains' on sale become so persuasive that consumers start spending again? Or will that only happen when inflation sets in (as it inevitably will given trends in prices of sugar, coffee and wheat) and people fear missing out on the bargains?
Posted by Gerard O'Neill at Thursday, August 13, 2009