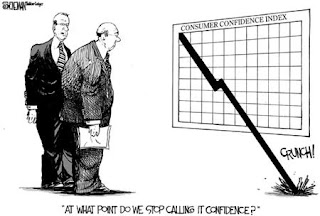 NAMA will happen in one guise or another. So I've started thinking about life after NAMA. I don't mean after NAMA - as that one will play out for a generation or three - I mean after a deal is done later this year.

The assumption behind NAMA is that our newly solvent banks will start lending to businesses and to consumers, and the wheels of commerce will start moving again. I'm not so sure. Firstly - who wants to borrow when you're still paying down your debts? As I've said before, debt is fact and wealth is an opinion. Looking ahead to the early part of 2010, as the NAMA dust settles, it's still hard to see what will induce Irish businesses to borrow, let alone consumers. Sure, there may be some export-led growth (perhaps underway already), but domestic demand post December's budget will remain deflated, with only modest prospects for improvement towards the end of 2010.

Such has been the shock induced by this recession that I think anyone currently running a business in Ireland will remain 'scarred' by the experience for the rest of their careers. That means a far more cautious approach towards expansion - including recruitment and especially towards borrowing. Particularly expansion in Ireland. Those of my clients who have the choice of investing in Ireland or investing elsewhere (either through green field initiatives or M&A) are almost exclusively focused on opportunities abroad.

It isn't just Ireland that faces an uncertain path to recovery: some commentators are even talking about the prospects for 'low quality growth' in the United States. So on balance I'm not expecting Irish businesses to drive recovery any time soon. Irish consumers might still surprise us - if only because they didn't over-indulge in binge borrowing to the same extent as their US counterparts. Hence a peaking in unemployment early next year could trigger the release of some pent up demand (possibly good news for Ireland's depressed car dealers).

But NAMA, alas, will make little difference to any of this.
Posted by Gerard O'Neill at Friday, September 11, 2009