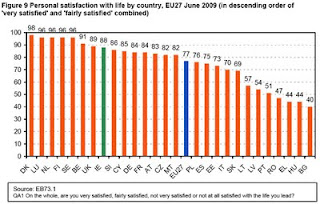 There's just no dis-satisfying some people. The latest Eurobarometer survey of the Union's citizens shows that the Irish continue to defy economic logic. Sort of. The chart - from the report on Ireland - shows that the Irish had one of the highest levels of life satisfaction of folks in the EU when surveyed in June. Higher than the French, the Germans, the Italians - and about par with the Brits. And that was June 2009, mind you: not the party years of 2006, 2007. Yes, just a few months ago. What's wrong with people - don't they know there's a recession on?

So despite rising unemployment, NAMA, rising taxes, NAMA, business closures and, er, NAMA, it seems that the good people of Ireland are doing all right. We're grand thanks. All of which makes you wonder about reforming the measurement of economic peformance and social progress. The French have produced a fine report which argues the case for going beyond (or around) GDP. The authors - lead by Joe Stiglitz - have covered all the well rehearsed issues about the inadequacies of GDP as a measure of all the things that are important to a nation's citizens.

As the report notes:

To define what well-being means a multidimensional definition has to be used. Based on academic research and a number of concrete initiatives developed around the world, the Commission has identified the following key dimension that should be taken into account. At least in principle, these dimensions should be considered simultaneously:

Sure - we all know from our day-to-day experiences that these and other 'simultaneous dimensions' have a bearing on our individual well-being. But the problem is, most of these indicators are highly correlated with one another. And almost all of them are correlated with GDP (in the long run and across countries). Worse, there is little or no consensus about how to measure these other dimensions: and most attempts amount to much ado about statistical noise.

Ultimately we have to recognise that the key feature of subjective well being is that it is, well, subjective. As this delightful essay by Carabelli and Cedrini concludes - inspired by Keyne's Economic Possibilities for Our Grandchildren:

Economics should ensure the material preconditions for a happy life, not happiness itself; it should allow men the possibility to freely formulate and choose among alternative plans for one’s life.

Making the right choices is the key: which is more the domain of philosophers than economists. Though even the philosophers are cautious about setting out too clear a path to happiness, as Jeff Mason observes:

You can't legislate for good luck or good judgement. But I'm not entirely against the Stiglitz initiative (my old tutor Tony Atkinson was involved and I'm a fan!). And I especially like Recommendation 10:

Measures of both objective and subjective well-being provide key information about people’s quality of life. Statistical offices should incorporate questions to capture people’s life evaluations, hedonic experiences and priorities in their own survey.

Research has shown that it is possible to collect meaningful and reliable data on subjective as well as objective well-being. Subjective well-being encompasses different aspects (cognitive evaluations of one’s life, happiness, satisfaction, positive emotions such as joy and pride, and negative emotions such as pain and worry): each of them should be measured separately to derive a more comprehensive appreciation of people’s lives. Quantitative measures of these subjective aspects hold the promise of delivering not just a good measure of quality of life per se, but also a better understanding of its determinants, reaching beyond people’s income and material conditions. Despite the persistence of many unresolved issues, these subjective measures provide important information about quality of life. Because of this, the types of question that have proved their value within small-scale and unofficial surveys should be included in larger-scale surveys undertaken by official statistical offices.

And there's the rub. According to one recent survey of subject well-being (see above) the Irish are having a great time. President Sarkozy has been accused of trying to game the measurements of economic performance by including things like holiday entitlements (which the French happen to do well in compared with others). Even though the current gripes of the average French mec are economic ones ...

But maybe our political leaders should let him have his way - so long as 'life satisfaction' is included in the new 'Gross Domestic Happiness' measure. That way Ireland can once again resume its rightful place among the happiest of the nations ...
Posted by Gerard O'Neill at Thursday, September 17, 2009