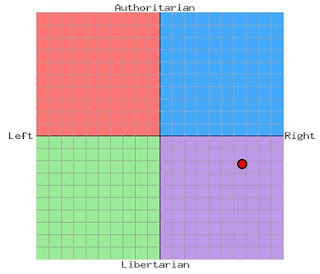 As a follow up to my last post, I thought I'd mention the Political Compass. It's a fascinating methodology that seeks to explore political values on two dimensions rather than the traditional Left-Right dimension. The traditional dimension is still there - on the horizontal axis - but the test developed at the Political Compass also plots your political values on a second, social dimension in relation to Authoritarian-Libertarian values.

The test takes a few minutes - and there are no 'don't know/neither/nor' options in the answers (which means it might take you longer). The chart shows the plot of my answers: I thought I might have been further down the Libertarian axis but there you go - a sign of conservative old age I guess!

They even have a handy chart plotting the main Irish political parties - dated from 2007. Hence the PDs are still on the map 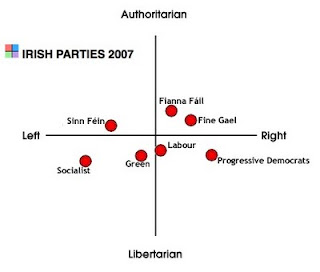 , so to speak. Mind you, by the time of their demise I would have put them rather more to the north of Fianna Fail.

The origins of the Political Compass are not very clear, and there are similar maps in use. But it's an interesting one nevertheless. I expect that by the time of the next election most parties will have moved considerably more towards the top left hand box.