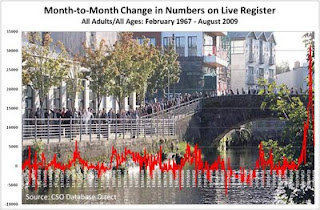 Maybe employers are running out of people to fire? Certainly the speed of decline in the numbers joining the live register appears to be mirroring its rise at the start of the year. Or maybe it's the free market in action: when the economy was growing jobs in the private sector expanded at an unprecedented rate - then they contracted as the economy shrunk?

I've charted the month-on-month increase in the Live Register since February 1967 using the CSO's Database Direct service - including today's latest numbers for August. What is striking about the chart is that even in the worst periods of the 1970s and 1980s the month-on-month increase (seasonally adjusted) rarely spiked above 5,000. Until, that is, late last year/early this year: when it reached a net increase of 31,400 in January. But it has plunged since - back down to 5,000 in August. That's bad of course, but it's right back to the longer run trend we've seen these past 40 years (and relatively better as the numbers in work are much higher than in previous decades).

So what's going on in the Irish workplace that has seen such a sudden fall back in new redundancies? It may be that we have adopted already to the 'New Normal'. Including reduced working hours and pay as alternatives to redundancies. Hence the emergence of the four day week for some, and that old thank God it's Thursday feeling. And perhaps if people are paying more and more of their marginal income over to Brian Lenihan then people might prefer extra leisure time to extra income.

As Fred Dent spells out in an inspiring presentation, we've been here before - and faced even worse crises. How? By letting businesses, workers and consumers figure out for themselves how best to navigate the uncertainties and choices that they face: that way recovery lies. Remember: recessions are mainly macroeconomic phenomena; recoveries are mainly microeconomic.
Posted by Gerard O'Neill at Wednesday, September 02, 2009