The latest CSO data showing the return of emigration - after years of net immigration - is one more sign of how bad things are. It is especially bad in terms of its demographic impact, not least on the young population. The CSO's data shows that 15-24 year olds and 25-44 year olds make up most of those emigrating (whether indigenous Irish or foreign nationals departing from Ireland).

The real problem for Ireland is that we have fewer young people in 2009 than the last time we had persistent emigration. Which is one reason why the percentage of 15-24s, and to a lesser extent 25-44s (a much wider age band), has already reached the levels of the late 1980s even though the numbers emigrating are still much lower. I've charted this below: 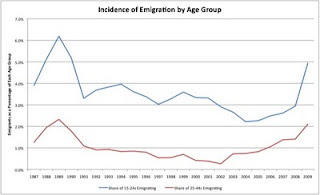 This also means that the impact of a return to net emigration will be especially severe on the numbers of young people in Ireland - as their numbers are already declining anyway due the the collapse in the birth rate during the 1980s. I have used the latest 2009 population estimates by age group from the CSO, and prepared population projections for the next five years. The CSO published projections based on different assumptions for the level of migration over the next 20-40 years. However, all their projections assumed net immigration - and not a return to net emigration.

Remember - the population of 20-29 year olds is declining anyway, hence the fall in numbers to 2014, despite - in this scenario - assumed immigration. Here's the table: 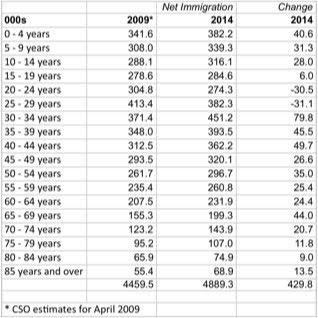 And there in lies the real threat posed by a return to emigration. As 20-29 year olds will be those most likely to leave, then the projections in the 'optimistic/net immigration' scenario will prove to be very optimistic indeed. Another generation lost to the Diaspora. It must be stopped.
Posted by Gerard O'Neill at Wednesday, September 23, 2009